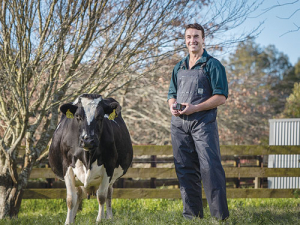 Penethaject RTU (ready to use) took seven years to develop, register and launch; it has a unique formulation that requires no pre-mixing.

It’s the first time such a formulation has been developed anywhere in the world.

“The active ingredient of Penethaject RTU, known as Penethamate, previously came in powder form and had to be mixed with a liquid by the farmer or veterinarian to create an injectable solution.

“Developing a pre-formulated version had been a scientific challenge for many years until scientists in Bayer NZ’s laboratories worked with Otago University to create a stable formulation, something that had never been achieved before.”

Castle says Penethamate is stable long term as a powder but not as a liquid.

“The challenge was to create a liquid formulation in which the active ingredient remained stable and active without caking or sticking together in clumps.”

To overcome the caking issue, Bayer worked with Otago University on adding different ingredients to stabilise the formulation, before finding a formulation that worked.

“The whole process, including clinical trials, stability testing, registration and commercial manufacturing, took about seven years. It’s a world-first and confirms NZ’s position as a leader in dairy science.”

Castle says the chemistry in Penethaject, a form of penicillin injected into the cow’s muscle, is so ‘clever’ that it allows antibiotic concentrations to build up in a cow’s udder. These concentrations are up to 10 times higher than those achieved by other penicillin formulations.

This allows the antibiotic to directly work on the mastitis bacteria, particularly Streptococcus uberis, the most common bacteria responsible for mastitis in NZ.

Once the mastitis is treated, the antibiotic quickly leaves the milk, allowing the cow to be back in milk production, in some cases within 48 hours.

Castle says farmers need to be particularly alert to the clinical signs of mastitis, which include changes in the colour and consistency of the milk, and/or redness, heat and swelling in the udder.

Penethaject RTU is a restricted veterinary medicine, and is only available under veterinary authorisation.