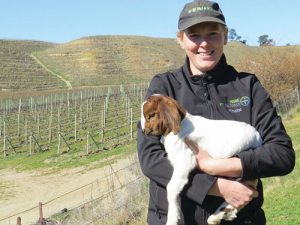 Having placed runner-up last year, this Central Otago woman was more determined than ever to better herself for one final try at the national title this year before it was too late.  Bulk turned 30 the week after the event which was held in Martinborough in August in conjunction with the NZW Bragato Conference.

Bulk had been planning her defence of the regional Central Otago Viticulturist of the Year title since last year’s nationals.  “I don’t think a single day went by that I wasn’t planning it…I was pretty much focussed … it was very intense…” she said.  She had to win the regional title so she could have another go at the national title, and time was running out.

Bulk is assistant viticulturist at Felton Road Wines in Bannockburn where she started working six and half years ago, during her final year’s study for her Bachelor of Viticulture and Oenology degree through Lincoln University.

The six-week work experience turned into a permanent job, and being a relatively small (32 hectares) vineyard operating over four properties, Bulk gained a breadth of experiences including organics and biodynamics, pruning, canopy work and tractor work through to working in the winery.

“It’s fantastic for Central Otago to have another person win at national level,” said winemaker Blair Walter.  Another Felton Road protégé, Nick Paulin, won the national Young Viticulturist title back in 2011.  “It points to a pretty nice history for people getting to work with [Felton Road viticulturist] Gareth [King]. …It shows the level he is able to cultivate with his team,” said Walter.  “We’re extremely proud of Annabel, and what she’s achieved.”

Bulk said there was a “huge difference” between the 2017 and 2018 national finals, but she was also “definitely more prepared this time.”  After last year she felt she needed to study more about conventional grape growing and spraying, especially for the pests and diseases section. This year there was more organic focus and the option to answer some questions either conventionally or organically, which played into her hand.

She felt her experience was also helpful in the research project for developing an undervine weeding plan for a hypothetical vineyard.  “I had to go in without bias and do research on chemicals, which linked in with the study I was doing.  But coming from a more organic background I have a lot of knowledge about different weeding regimes and trials, and I wrote a huge report which included nine options and I was able to budget each of those out.”

She said the fact that all six contestants recommended a movement away from chemicals points to a significant shift in industry thinking.

Camaraderie between the finalists developed quickly, they supported each other and became “really fast friends,” said Bulk.

Her speech topic on challenges facing her region brought people’s attention to the fact that Central Otago is still dealing with Phylloxera. She stimulated some feedback from reflections that the “commoditisation” of Pinot Noir grapes being shipped out of region for blending with 15 percent other wines was “watering down” the terroir influence and affecting the Central Otago brand, while some local wine contract companies were missing out.  She also proudly highlighted the fact that 23 percent of Central Otago grapes are now growing under organic certification.

Bulk’s prize package includes a Hyundai Kona SUV for a year, $5000 AGMARDT Travel Grant, $2000 cash, Bahco golden secateurs, glassware and a leadership week where she
will travel around New Zealand to meet influential people from within the wine industry as
well as leaders from other industries.

But there’s no let-up yet for Bulk as she goes on to represent the wine industry in the national Young Horticulturist of the Year competition in November. Giving her just eight weeks to come up with a new innovation for her sector and develop a business plan for it.