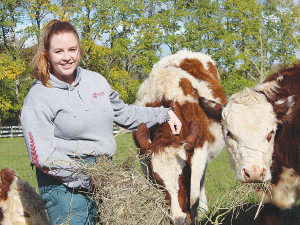 So says Courtney Davies, the New Zealand representative to the Bayer Youth Ag Summit, in Brasília, Brazil, in early November.

Davies (23) says she comes face to face with this issue daily as an educator in environmental sustainability and the oceans with the Sir Peter Blake Trust.

She is quick to try to shift misconceptions about agriculture among young people, she says.

“When we talk to a lot of students about pollution their first thought is that it is from agriculture rather than thinking big-picture about population density and other factors.”

She tries to give them a wider view.

Brought up on a lifestyle block near Auckland, Davies has been active for many years in A&P shows through her award-winning Ayrshire cattle breeding.

She says communication was an important and similar thread throughout the Bayer Youth Summit in Brazil, attended by 99 young people from 45 countries.

The summit, run in partnership with Nuffield Brazil, brings together young change-makers aged 18-25 to tackle the challenges of how to feed a growing population by 2050.

Disconnection between consumers and producers of the food was a common theme, Davies says.

“We’ve got the farmers producing goods for consumers but the consumers take it for granted,” Davies told Rural News. “They don’t understand why butter increases 50 cents or why the price of milk changes and how that reflects on the agricultural economy behind the scenes.”

She says being able to show people and open their eyes to where their food comes from “will connect them more with farmers”.

Davies believes misconceptions can occur because of extreme images in the media and the average Kiwi not having access to a farm. She was interested to see at the summit that other countries are dealing with similar issues -- even developing countries where the populations and economies may be more closely tied with primary producers.

People need more critical thinking skills to have more awareness of the wider issues, she adds. At the summit they pitched ideas on tackling food security.

“Mine was about education, similar to my current job using virtual reality. We could expand that virtual reality scope to include agriculture, bringing people digitally onto a farm especially for schools and communities that can’t be present on a farm,” Davies explained.

“If we can show them what it is like to milk a cow, [assure] them that, yes, calves get removed from cows but see the calves in pens with other calves: they are drinking milk and the cows are being treated properly. That beef goes from being in a grassy area to ending up on someone’s plate.

“We could increase that awareness visually because I think a lot of people don’t understand agriculture.”

Davies has a master of natural science (microbiology) from Massey University. In 2016 she won a Blake Ambassador Freshwater internship at NIWA working on understanding the link between urbanisation and dairy science.

She hopes to work in agriculture, educating younger people and being part of science, governance, leadership and decisionmaking as well.

“At times we have people making the decisions who don’t understand either. We need to educate young people but also create resources and tools and ways to communicate with the people in the positions who make these decisions.”

Davies says going into the summit she knew New Zealand was ahead of the times in sustainable practices. Company visits included one talk on sustainable milk production presented by a New Zealander.

“Just based on that I could tell straight away New Zealand’s agricultural and food production is well respected overseas and a lot of countries are trying to do something similar.”

Some participants had heard about New Zealand but hadn’t been here so their perceptions were interesting.

“They perceived it as very clean, with a clean green environment .

“It was nice to see that and give them a firsthand-view explanation as to what we do here and how it could be different from their countries and to swap practices.”

She saw a lot of digital innovation and technology which New Zealand could learn from. They visited one of the biggest high-tech farms in Brazil with 400,000ha of farmable land.

Her takeaway impression was that while paying respect to the previous methods of farming, we need to be aware that times are shifting and embracing innovation and digital technologies is important.