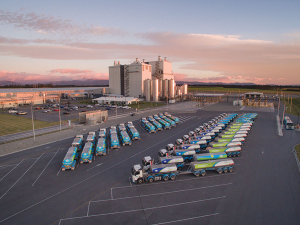 Fonterra says it has been working on its transition to renewable energy for some time.

This exceeds the 15,000 submissions made in 2018 on the Zero Carbon Bill, which included the establishment of the commission.

"The level of constructive feedback we have received will ensure the commission's advice to government on the direction of its emissions reduction plan and recommended emissions budgets are enduring and practical.

"As an independent crown entity, our role is to provide the advice, but the Government must develop the detailed strategy and take action. Once we have handed over the advice, the ball is in its court."

Many of the responses, for example from representative groups, have bundled submissions on behalf of large numbers of members. In some cases, single emails included template submissions from hundreds or even thousands of people.

"A lot of organisations with a very keen interest in the transition to a low emissions future for Aotearoa have gone to great efforts to encourage their members to have their say and coordinate those responses. We are very grateful for the work that has gone into these submissions," Hendy said.

The commission must deliver its final package of advice to the Government by May 31 and within 10 working days Minister of Climate Change James Shaw must table the advice in Parliament.

Hendy says the commission has received very positive feedback on its consultation process and extraordinary interest and engagement in its work. During the consultation phase, the commission team held or attended around 200 events and talked with an estimated 4,000 people.

"We learnt a lot through the consultation phase and one of the things we're seeing as we go through the submissions is a lot of consistency with what we hear across Aotearoa during our consultation.

Coal Not In Co-Op's Plan

Fonterra has told the Climate Change Commission it has been working on its transition to renewable energy for some time.

Despite some "practical constraints", the co-operative says it will get out of coal.

Nine of its 29 sites use coal and chief operating officer Fraser Whineray says there's been a lot of progress over the last few years to get the co-op to a position where it can make this commitment.

"With customers in more than 140 countries we have global insights and long-term trends supporting these actions, which have been in progress for some time," he says.

Conversion or replacement of existing coal boilers to renewable energy is a significant, logistical, technical and financial uptaking.

"We've built a lot of capability in-house and with partners in New Zealand and internationally and this provides us with comfort that solutions are sustainable.

"It's important to us that New Zealand continues to be at the forefront of sustainable food production - and getting out of coal is one way we can help with this," Whineray says.