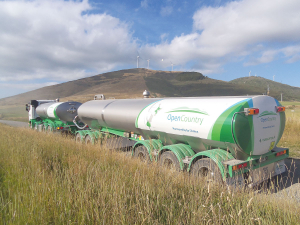 Open Country suppliers are in line for another record milk price next month.

For milk supplied to the Talley's-owned processor during December and January, and paid in March, Open Country suppliers are in line for a new price range of $9.45/kgMS to $9.75/kgMS.

"We are entering territory that we have not seen before with both pricing and foreign exchange delivering record returns to all dairy farmers.

"This has meant another upward revision in our forecast for the balance of the season.

"It will also mean another record-breaking settlement as we head into March."

The final milk price is being finalised and Koekemoer is confident that the milk price will be in this range.

Koekemoer says it has been another solid month as prices continue to rise for dairy ingredients.

"And we have been well placed to take advantage of it," he says. "We have been able to align our product mix to capture the best returns for our products in the marker, which has been awesome to see.

"It is not often that every product group performs extremely well, but for now it seems they are all on an upward trajectory."

Open Country has also adjusted its forecast for the May period to a range of $9.45 to $9.75/kgMS.

This period includes milk supplied between February and May and farmers will be paid out in August.

Open Country Dairy has offered a fixed milk price of $9/kgMS to its farmer suppliers for next season.

Chief executive Steve Koekemoer says there has been a good uptake of the offer.

"Being able to lock in a milk price of $9 for a portion of your milk for the upcoming season seems a very sensible approach." he says.

“Although the short-term view looks very positive, we know that the tide can change easily within a year and FMP gives farmers some certainty at prices that work for their business.”

Koekemoer believes the medium- to longterm outlook will depend on several factors, including global supply chains freeing up, costs coming under control and the ability for the big exporting dairy producing countries to ramp up supply.

“To date, this has been limited, but we expect it to change at some point when Covid volatilities ease.”

The country's second largest processor believes we are heading for another stable season with regards to milk price.