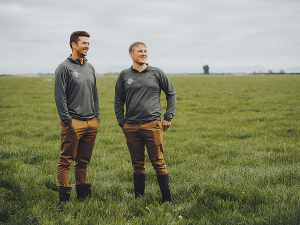 Chris Poole (right) and Tim Dangen are two of the finalists for the FMG Young Farmer of the Year title.

As 2022 FMG Young Farmer of the Year Grand Finalists, it was part of their preparation – all under the watchful eye of Emma Poole, nee Dangen.

The pair will go head-to-head in July representing their regions – Waikato Bay of Plenty for Chris Poole, 28, and Northern for Tim Dangen, 30.

Emma herself was a 2019 FMG Young Farmer of the Year Grand Finalist and wants to make sure her big brother and husband are prepared for the grueling three-day event in July.

“It was hilarious watching them go against each other. Tim looks a lot more physical and stronger than Chris but I saw Chris motor past him while they were doing the running and Tim looking out the corner of his eye thinking ‘what the hell’,” she laughed.

Emma reckons the pair are competing ‘with’ each other, rather than ‘against’ each other.

“They seem to be helping each other out a lot and hopefully that’ll be an advantage to them doing it together, rather than doing it separately,” she said.

Chris agreed saying the pair have been sharing study notes and giving each other advice where they can.

“We’re not just brothers in law, we’re really good mates so it makes it a bit more fun than it usually would be,” he said.

“Regardless of the result, we’ll both be happy for whoever comes out on top and it’ll pretty fun doing it together.”

Despite jokes of sabotage from Dangen, he hopes one of them will give it a good nudge and take out the FMG Young Farmer of the Year title.

“It’s going to be fun, I’m excited to compete with Chris. We’ll push each other, I know that, but at the end of the day I’ll be just as happy if he won, to myself winning,” Dangen said.

“The competition deserves respect in itself; when you look at past champions you want to be able to stack yourself up against them with the knowledge you’ve tried as hard as you can.”

Emma and Chris are based on his family dairy farm near Pirongia which they’ve bought into.

She juggles her time being a new mum with their four-month-old son Beau, a veterinarian, rearing calves and building a house on the farm – all while ensuring the boys are prepared.

Having done it before, she said she understands the challenge and is able to be there to push the boys a bit more when they don’t feel like it.

“It’s quite a challenging thing to go through and it’s hard to motivate yourself every day you come off the farm to do more study and practice,” she said.

“There’s a fair bit of knowledge there to draw on and a different train of thinking which is what you need in this – diverse minds coming together to try and tackle all the challenges,” Dangen said.

Asked who she’s backing, Emma’s answer was “no comment”. Upon reflection, she said, “actually a new New Holland tractor might be nice”.

She predicts each competitor will be stronger in their respective fields: Chris a dairy farmer and Tim a beef farmer.

“I think it’ll end up being what modules on the day show up and it’ll randomly swing one of their ways,” she said.

The three-day Grand Final is a great opportunity for both families to come together, something she’s really looking forward to.

“I don’t know if I’ll be able to watch though,” she laughs. “I’ll just be happy to see them both finish with a smile on their face.”