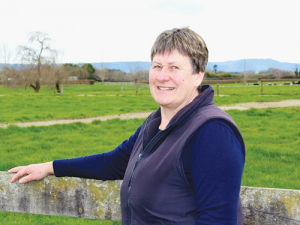 Adrienne Wilcock on her farm in Walton, near Matamata.

In February 2011 Adrienne Wilcock and her husband’s farm had 111 heifers in calf. That was until the neospora ‘abortion storm’ a short time later, resulting in just 59 of the latest line of genetics continuing on in the herd.

The following year the Wilcocks lost their farm cottage to a fire.

In 2014, some reprieve came with the record milksolids payout. But the good payout times quickly vanished. The tick-parasite theileria struck, and on the heels of that came an outbreak of facial eczema.

“The word resilience is bandied about a lot, but that’s simply a trait we as farmers must have, even though we’re tiring of it somewhat,” Wilcock says.

“After all, we’re involved in a hugely complex business that’s evolving all the time as technology and science progress, along with coping with volatility.

“Yes, we’ve got new issues onfarm with compliance and we are striving to maximise efficiencies and minimise waste. But as an industry it’s important to remember we have mitigated some of the challenges of 30-odd years ago such as bloat and milk fever. We know much more now.”

Wilcock is adept at observing detail on her own farm and seeing the bigger picture, AWDT says. The First Steps courses the organisation runs has been the key to this.

Says Wilcock, “I went on a First Steps course in 2012 and I distinctly remember it sparking a change in my thinking. There was a realisation of what else could be possible.”

First Steps, run specifically for women in agriculture, complements the trust’s Escalator programme, which Wilcock has also completed. She says the courses have led to her now having influential contacts in most dairying regions in New Zealand.

“I met LIC’s chief financial officer, Linda Cooper, on the Escalator course, and many other women who are not necessarily farmers but are key players in our industry.”

The courses have helped her become more self-aware.

“I need a purpose, I like to achieve things. I‘m a glass-half-full person. That’s what the course did for me – it helped me drill down, peel back the layers and discover what truly drives me.

“So even though I’d been an active farmer with my husband for over 30 years, had raised a family and been extensively involved in the community, I didn’t truly realise what skills I had acquired.”

Technically, many farmers’ wives see themselves as ‘being out of the workforce’ but they don’t realise how pivotal they are and what they have to offer, Wilcock says.

The First Steps courses help identify skills and opportunities: “You gain confidence from realising you have many transferable skills, and from there you can take your next step, whatever that might be.

“The Escalator programme builds on First Steps and covers leadership and governance.”

Wilcock is now the DairyNZ-appointed representative on the board of the Agrecovery Foundation, a rural recycling scheme.

“One of our goals is to lift the collection (recycling) rate from 30% of farm chemical plastic containers sold to 60%. The recycled plastic is made into other products, eg a cable cover that protects underground cables from spades cutting through them.”

Her governance role led to another board role: she is now on an Environment Canterbury project that investigates ‘ethical solutions’ for farm waste that is otherwise burned, buried, or bulk stored.

“As a dairy farmer I bring grassroots knowledge to the table. Like most famers I want to be a good steward of the land and we require practical, simple, cost-effective solutions to support us to do the right thing.

“It’s amazing what’s still out there, stuff like 245T and DDT; most of those chemicals are stored in the back of sheds. At least it’s not being dumped, but it’s time something more was done about it.

“I never thought my agriculture journey would involve this sort of work.”

Six businesses are competing in three categories this year at the Enterprising Rural Women Awards (ERWA).