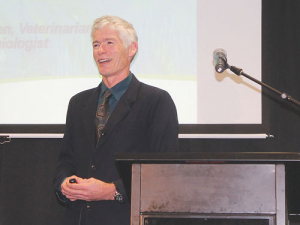 Most farms infected with Mycoplasma bovis may already have been detected but you must be confident you have got the last one, says MPI veterinarian epidemiologist Andy McFadden.

Studies at this stage also indicate that the M. bovis incursion is a one-off that occurred in late 2015.

Personally he is confident not many infected properties are yet to be found, he told the NZ Institute of Primary Industry Management conference in Hamilton.

Asked for his personal opinion on what stage the eradication process had reached, he sounded notes of caution and patience.

“When you are talking about eradication you have to find the last farm, and even that is a simplification. If the last farm is a dead-end host all the animals [will be] going to the slaughterhouse and it is not a forward risk.

“But in talking about the last farm where there is a risk of forward transmission… it is not a case of ‘we’ve got 99% of the infected properties’ because we’ve got to find that last farm.”

Being confident you have found the last one is the difficult bit, he says. Work on improving testing for the disease is ongoing.  “At the end of the response we are going to have more tests and more confidence that in fact we are free.”

To be asked what stage the eradication process is at is a difficult question because it is not linear, he says.

McFadden suggests we have a ‘social media instant-gratification’ approach to eradication -- wanting to get rid of a problem in a very short time. Disease control programmes, such as hydatids, have historically taken decades but NZ has succeeded in eradication when other countries haven’t.

“We still have a difficult disease; the tests are time consuming. It needs working through over time and we need patience.”

Earlier he told the conference that the infected farms are well and truly connected. Understanding an infection network in an outbreak is almost unheard of at this level of detail.

“In this particular outbreak they are almost all connected and we have an understanding of how that connection has occurred.”

A group of individuals got together from government and industry to try to work through where the M. bovis came from. A number of scenarios were looked at and genetic testing of the bug was carried out. This testing ruled out imported cattle from Australia as a pathway.

Germplasm is the most likely pathway, but none of seven pathways looked at seemed particularly likely. He referred participants to the pathway report on the MPI website.

They are assuming a one-off event that has resulted in this outbreak.  Looking at the rate of mutation and the different strains they can work out how long it is likely to have been here. All the information supports that late M. bovis first arrived in late 2015.

It all points to change

On very large farms with different ownership models today many veterinarians have limited contact with the animals, says McFadden.

That affects our surveillance ability: “What worked in the past – an eye on new incursions – won’t work now. We need to understand that and work out other solutions.”

He suggested legislation may be needed for greater oversight of animal welfare and a review of veterinary contact with farms and biosecurity risk behaviours.

A University of Otago study has found that the Government's response to the 2017 Mycoplasma bovis outbreak inflicted significant and lasting trauma on farmers whose stock was culled.

The director-general of MPI has praised the dairy industry saying its performance in the past year has been tremendous.

Revenue from primary exports is predicted to reach a record high of $49.6 billion in the next 12 months - all being equal.