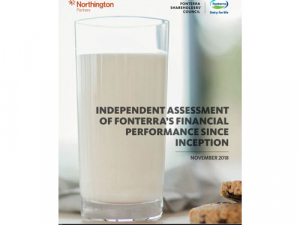 An independent assessment of Fonterra’s performance, commissioned by shareholders, paints a worrying picture.

The report by Northington Partners shows that the co-op’s return on capital has averaged 6% per annum, lower than the assessed benchmark of 6.9 to 7.7% per annum.

It also shows that the value-add business returned 0.2% p.a. more than Ingredients, significantly below the 1.3% p.a. premium needed to justify the increased risk.

Northington Partners was engaged by the Fonterra Shareholders Council to assess Fonterra’s financial performance since its inception.

The report was emailed to shareholders on the eve of the co-op’s annual general meeting at Lichfield on Thursday.

Council chairman Duncan Coull says the work was in response to a heightened level of commentary within the supplier base, media and the broader financial community in relation to the perceived performance of the co-op since it was formed in 2001.

The council saw benefit in obtaining an independent and reliable view of actual performance over the last 17 years based on sound methodology and having access to relevant financial information, he adds.

“This report provides a high-level summary of the results that is clear and accessible to all of our co-op members. We believe it will be a useful input into the ongoing discussions about our co-op’s continued evolution.”

The review looked at just one part of the overall returns that Farmers earn – their return on capital invested in Fonterra.

Coull notes that Fonterra’s role is far greater than this - as set out in the Fonterra constitution. “Fonterra exists to maximise returns to farmers through Milk Price and dividend, and the standalone performance of the co-op is therefore only one component of the overall returns achieved by Fonterra suppliers,” he says.

“In simple terms, Fonterra effectively operates two businesses. The Milk Price received by its farmers is a measure of global supply and demand for base milk ingredients and the efficiency of converting that milk into those ingredients, whereas the share value is a measure of the co-op’s success in delivering value over and above the Milk Price through time.

“The assessment clearly shows that Fonterra’s financial performance since inception has been unsatisfactory.”

Coull says when considered as a stand-alone investment, the average returns generated by Fonterra since inception are lower than relevant benchmarks.

“Council’s view is that the information provided in this report should inform a wider discussion between board, management and shareholders around the continued evolution of our co-op and in particular what can be done to ensure ongoing returns meet, as a minimum, the opportunity cost of farmers’ capital invested in the cooperative.”