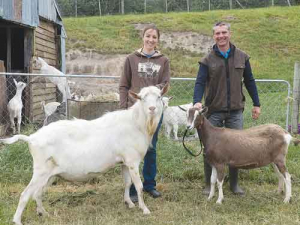 South Island dairy goat farmers still have no large-scale market for goat milk some 18 months after a Chinese-backed processing plant began to be built -- with some fanfare – at Ashburton.

New Zealand Dairy Collaborative has been set up by local businessmen with Shaanxi Fineboon, said to be China’s largest goat-milk infant formula brand, as the major shareholder.

It has built a plant at the Ashburton Business Estate, just north of the town.

It was reported they would initially blend dried goat milk powder from the North Island into infant formula for supply to China, and later add a drying plant to process locally produced goat milk. The building was to have been finished in October 2016 but is not yet operating. The building appears complete but has no branding, and no fit-out is visible through the glass frontage of its ground-floor offices.

A spokeman for Ashburton businessman Peter Huang, a director of the company, has told Dairy News that a new chief executive was due to be appointed on December 12 and the factory could start operation in March or April.

Local dairy goat breeders say they are willing and ready to supply milk but still do not know what NZ Dairy Collaborative’s plans are.

Jonathan Carden-Holdstock, vice-president of the Canterbury Dairy Goat Breeders Association, says they have no way to get in touch.

“We’d welcome them to come and talk to us because if they are long-term and looking to get a supply base, we would obviously be very interested in hearing from them.

“Surely they need to start talking to people and I would assume naturally one of the first ports of call would be the local breed groups.”

Phill Clapham, who milks 200 goats at Seadown, near Timaru, told Stuff in August 2015 that he and his wife Amanda had been tempted back into dairy goats, buying a herd of 125, with the intention of supplying the Ashburton factory.

After many months of discussions with New Zealand Dairy Collaborative, however, he has not had any contact in about a year.

“I think they’re embarrassed because all the things they said they were going to do haven’t happened.”

“We all thought the Fineboon place at Ashburton was going to be the cat’s whiskers. I don’t give up on it but I’ll just keep supplying Whitestone for now.”

New Zealand Dairy Goat Breeders Association president, Jayne Arscott said she also had tried unsuccessfully to contact the people behind the Dairy Goat Collaborative. There were a lot of rumours about what they were planning to do “but unfortunately they’re not talking to the local people”.

“Many people have been burnt because they heard it was going to start and they bought a lot of young goats and stuff and started to get ready, then it just didn’t happen so now they’re having to sell off stock.”

Arscott farms a herd at Cust, near Rangiora, with her daughter and son-in-law Alice and Craig Jones. They are milking 18 goats this year and hope to milk about 30 next year.

They make their farming pay by using the milk to raise calves. They also make cheese for the family but Arscott says compliance costs are prohibitive to sell milk or cheese to the public.

“We understand everything has to be done right, but for small people to set up it’s a huge compliance cost before you get any return and at this stage it’s a bit of a gamble. How big is the market going to be? How much can you sell to your local area? You haven’t got a supply chain.”

Jonathan Carden-Holdstock and his wife Chrissy farm about 120 goats and 100 cattle on their 67ha at Ataahua, nestled between the Banks Peninsula foothills and Lake Ellesmere on the Christchurch-Akaroa Highway. Most of their goat milk goes on feeding their calves and kids.

Chrissy has recently started making goat milk soap, selling about 15 bars a week through a local farm shop. However, that accounts for only about 4.5L of milk a week – about one good milking doe’s daily production.

They also sell young does to North Island milkers, “which is a shame because if they stayed in the South Island you’d build up the herd very quickly,” says Chrissy.

Jonathan Carden-Holdstock said the Canterbury breeders group have a core of 15-20 serious breeders, “a whole load” of hobbyists, and South Canterbury members south of Ashburton.

“The Ashburton factory pretty much sits in the middle of those two areas so potentially they’ve got a good base but they just need to be talking to us.”

The Carden-Holdstocks said they had investigated building a factory room for cheese, ice cream and yoghurt, but decided the compliance rules were “a total nightmare”.

“The system does not allow for small startups,” said Jonathan. “The reality is the cost and ongoing costs and it doesn’t end there. We’re farmers, not marketers, not sales reps.”

Meanwhile, he said it was “weird” that even in the North Island where the Dairy Goat Co-operative operates, most product goes overseas as dried powder.

He said New Zealand is the only western country where fresh goat milk is not readily available at a corner shop or supermarket. Some is imported from Britain and sold “at $7.00 for a little tiny carton”. “The whole thing is completely nuts.”

He said fresh goat milk is what people asked about the most whenever they do milking demonstrations at A&P shows.

Jonathan is the dairy goat convenor for the Canterbury Show, where this year they showed about a dozen animals.

He says showing animals is not for everyone but acts as a shop window. “When you’re breeding stud stock, it’s been hugely beneficial.”

“A bog-standard average dairy goat might be worth a couple of hundred dollars.”

Garrick Batten on why there aren't more goats on pastoral farms.