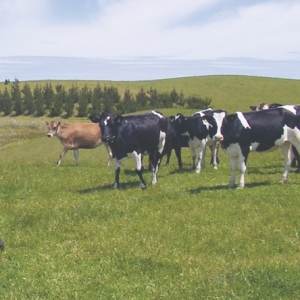 Most heifers underweight at 22 months old.

Five new focus farms will give graziers knowledge and resources to help grow heifers better, and strengthen their relationship with dairy farmer clients.

An LIC study of 105,000 animals showed 73% were 5% underweight at 22 months old. The Heifer Grazing Project focus farms help to address that statistic and seek to improve the national six-week in-calf rate. The project is led by DairyNZ with dairy farmers, graziers, grazing companies, vets, Beef + Lamb and LIC.

DairyNZ’s Sarah Dirks says the grazier’s role cannot be underestimated. “Heifers below target liveweight will have a lower six-week in-calf rate, a higher not in-calf rate and lower milk production.”

“Heifers that achieved 90% mature liveweight at calving could produce an extra 2-2.5kgMS/kg of liveweight over an average life of five lactations, compared to being behind target.

“So, for a 50kg improvement to achieve target weight, that would translate to 100-125kgMS over five seasons.”

Over two months, at the end of 2013, Dirks met with 100 farmers, graziers, and rural professionals to explore the dairy farmer/grazier relationship. This showed a need for examples of graziers doing well, which led to the focus farms.

“A standout reason farmers gave for heifers not being raised as well as they could was the gap in relationships between parties,” says Dirks.

“Specific answers included not having an agreed contract and having different expectations, like who was responsible for supplying extra feed.”

Dirks says the purpose of the focus farms – in Northland, King Country, North Otago and Manawatu – is two-fold.

“We want to provide farmers growing heifers with better information and allow them to share their experiences with others; until now there has been a knowledge gap.

“The other goal is to strengthen relationships between graziers and dairy farmers. Are expectations being met from both sides, and if not, why not? These focus farms will help us… address some of these questions.”