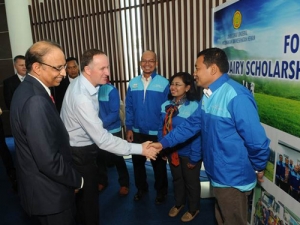 Fonterra's Cikarang site, which was built to meet Indonesia's growing demand for dairy, has the capacity to blend and pack up to 87,000 packs of Fonterra's Anlene, Anmum and Anchor Boneeto dairy brands each day.

The $36 million facility was opened in September last year and is the dairy cooperative's largest investment in ASEAN in the last decade.

President director of Fonterra Brands Indonesia, Achyut Kasireddy, says New Zealand and Indonesia have shared a positive relationship over the past 65 years, and as New Zealand's largest company, Fonterra has been flying the New Zealand flag in Indonesia for over 30 years.

"It's a great honour to host both the New Zealand Prime Minister and Deputy Minister of National Development Planning here today, alongside other dignitaries, to celebrate both countries' strong agricultural and business relationship," says Kasireddy.

"This is a market with large potential. Fonterra's longstanding commitment to Indonesia should encourage other New Zealand companies to play a greater role," says McClay.

Kasireddy added Indonesia is one of Fonterra's priority markets where the dairy cooperative sees huge potential for growth.

"Our investment in this site allows us to produce more high quality dairy nutrition to meet Indonesians' increasing demand for dairy," Says Kasireddy.

"At the same time, as a dairy co-operative owned by farmers, we are looking to help grow the Indonesian dairy industry by working closely with local dairying communities to help up-skill farmers through our Fonterra Dairy Scholarship programme, which is now in its fourth year."

Several of the farmer alumni from the Fonterra Dairy Scholarship programme met with the delegation to share their experiences about being part of the 12 month programme. Run in conjunction with the Indonesian Directorate General of Livestock Farming, the participants learn best-practice dairy farming techniques through on-farm training sessions in Indonesia and during a 12 week visit to New Zealand.

As part of the visit the delegation toured the state-of-the-art manufacturing facility, tasted Fonterra's culinary expertise first-hand with dishes created by a Fonterra chef, and were treated to a showcase of Fonterra's leading in-market consumer brands Anlene, Anmum and Anchor Boneeto.