Methane not a villain 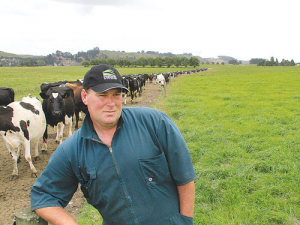 Many people do not grasp that methane is a short-lived gas that recycles, says Feds climate change spokesman Andrew Hoggard.

This statement in the PCE report is important, he says: “Given its shorter lifetime, emitting methane will not [cause] the same irreversible inter-generational warming that carbon dioxide or the release of nitrous oxide have.”

“It was good to hear that being mentioned,” says Hoggard.

“I don’t think a lot of people really get that; they just see that all agriculture produces 50% of our gases, not realising that is a static figure and that gas is recycling, it breaks down over 12 years, then it gets used to grow the grass, it produces the next lot of methane which sits in the atmosphere for 12 years and then breaks down. It all just goes round in a circle.

“So even if you reduce the gases you are still putting more and more up there. That will be there a long, long time.”

Hoggard says he hopes people pay attention to Upton’s talk on the importance of going hard on these long-lived gases. “Particularly in NZ’s case, whereas methane has gone up 5% since 1990, transport has gone up 78%.

“If we are serious about it and it’s not just a case of making big virtue signals, then we have to look at solutions [in respect of] transport needs and energy needs.

“We are already bloody good energy-wise -- 80% renewable. Can we get more there? That will certainly help things out.”

Hoggard says you often hear the Greens go on about how we must get agriculture into the ETS (Emission Trading Scheme).

“If you go back to those numbers, the methane has only increased by 5% of the overall 16% [increase in agricultural emissions] which includes nitrous oxide which is another thing we will have to work on – and that is outside the ETS.

“Transport has gone up 78% and that is inside the ETS.  Just having an ETS isn’t a solution.”

Much more work is needed on technological change in transport which will require more renewable energy, he says.