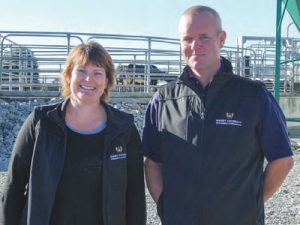 Up to 200 people recently attended a farm field day to hear the winning ways of South Canterbury sharemilkers Joe and Suz Wyborn.

The Wyborns milk about 900 cows on Grantlea Dairy No 1, a 253ha irrigated property near Geraldine. They have run the farm since it was converted by owners Leighton and Michelle Pye in 2009.

Although the Wyborns were then relatively new to dairying, they have developed the farm to the point of being named this year's Canterbury supreme winners of the Ballance Farm Environment Awards. They impressed the judges with their embrace of high-tech processes and tight protocols to create an operation which almost runs itself.

The judges cited Wyborns' industry-leading protocols and systems which staff can effectively duplicate without supervision, outstanding staff management with a priority on health and safety, planting of natives and exotics in unproductive areas of the farm, and excellent milk production based on sound pasture management and efficient water use.

Although the farm has no calves currently, a popular feature of the field day was Suz Wyborn's presentation of the highly automated feeding system at the centre of her calf-rearing operation.

She has six stainless steel Handy calf feeding stations installed in a north-facing open-front shed. Gates across the front keep calves in, while open doors at the back allow them to wander between the shed and open pasture.

With every calf electronically tagged and tag readers installed on each feeder, each calf automatically gets its assigned daily rations at times to suit itself. Because each feeder allows only one calf at a time, timid calves cannot be bullied out of their share and greedy ones cannot get more than their share since the flow would stop and they would soon get bored sucking at a dry teat.

Suz said the calves were quick to learn how to use the feeders. One developed a liking for getting both its daily feeds at once, and discovered it could do so by fronting up to a feeder just before midnight to get what was officially its second feed for that day, then immediately get its first for the following day when the system reset at midnight.

Suz, meanwhile, was able to monitor that behaviour from the comfort of home because the controlling software interfaces to any computer or smartphone. Each calf can have its own tailored feeding programme and with the whole operation closely logged any problems are quickly identified.

For his part in the field day, Joe Wyborn presented his system of pervasive checklists and a constantly updated "live document" operating manual which he started when they first arrived and is still evolving.

He said it was invaluable when he hired an English couple with the right attitude but no experience, who with the help of the manual quickly became among his best workers.

Joe also emphasised health and safety as an integral part of farm management. He said that although staff were salaried, they nevertheless all had to keep timesheets to ensure no-one worked dangerously tiring hours even at busy times such as calving.