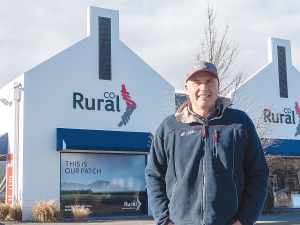 The farmer co-op owns and runs the Ruralco rural supply store chain, set up in 1963 as a buying group to get members better deals through strength of numbers.

Now it has 3000 shareholders, runs stores in Ashburton, Rakaia and Methven and has an online store that delivers NZ-wide. Its Ruralco discount card is accepted by at least 3000 retailers and service providers.

The Ruralco branding was launched three years ago. Its popular annual Instore Days have been going 25 years, celebrated recently. These have the suppliers and partners set up trade stalls in the stores for two days of specials.

A prize draw this year offered $250,000 of prizes including a Ford Mustang and other vehicles and home appliances.

Respect is the mark of Ruralco in the market, says the co-op’s chair, Methven dairy farmer Alister Body. Hence the many suppliers and partners at the Instore Day with so many prizes.

The business broadened its strategy with the Ruralco branding, Body says.  “More and more we’re growing into other areas. And although we don’t have retail stores in [faraway] areas we’ve put a fair bit of time and effort into our website and online shop.

“So no matter where you are -- North Cape to the Bluff -- if you ring up and want a drum of drench we’ll deliver it to you at  a competitive price.”

Co-ops not in question

Despite the sale of Westland Milk having raised a question about the cooperative model, Alister Body says it is a great business structure, although nothing magical.

“You’ve still got to observe the standard business rules: profit, liquidity, a balance sheet that suits your business and reinvestment in it for the future.

“All those things are no different from any other business. And if you overreach -- you might have too much debt or your profit’s too low -- just because you’re a cooperative won’t save you from that.”

He says margins “can be pretty thin” in rural retail.

“You’ve got to be sensible about what you’re doing, and we will close the books again with no term debt in our co-operative.

“We’re growing in shareholder numbers and our turnover is growing so we want to continue to develop that.”

Body says it is obvious that web-based shopping and e-commerce is growing.

“We’re very aware of that. We’re always trying to work out what rural retail might look like in 10 years and how best to serve our members. It’s a matter of putting business structures in place which enable us to make changes as we go.

“That’s one of the reasons why we’re not rushing out there and acquiring a whole lot of bricks and mortar.”

Body says it would be too easy to “throw stones” at Westland.

“I can’t make much comment on it, other than they found themselves... with a lot of debt and so unable to reap the benefits of their strategy and pay a competitive milk price to their farmers. It’s just unfortunate that’s where they got to.”

But he points out that a huge portion of New Zealand’s GDP comes from co-ops, many of them among NZ’s top 100 companies, including the biggest, Fonterra. He says a co-op structure particularly suits Ruralco as a farm supplies business.

Body farms the property he grew up on, owned by the family since 1925 and originally a traditional Canterbury arable farm. He and his parents converted it to dairy in 1981, well before the region’s big conversion push.

Regarded then as large-scale dairy, the 184ha property with 600 Jerseys is now below average size for the region.

Body has chaired ATS for two years and was previously a director of DairyNZ for ten years. He is a director of the Pastoral Genomics research consortium investigating genomic selection in ryegrass and white clover, and chairs the Dairy Environment Leadership Group (the governance group for the Sustainable Dairy Water Accord).

Body says that voluntary accord has been highly successful.

Westland Milk Products is about to start a pretty special gold rush aimed at increasing the Chinese-owned dairy company's profitability.