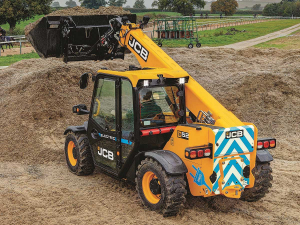 JCB has released its first 100% electrical Loadall telehandler, the 525-60E, with similar cycle times and no loss of performance compared to a diesel engine version.

Looking much like its internal combustion engine sibling, under the skin the normal “engine bay” is fitted with a 96v lithium-ion battery pack, which in turn powers two electric motors. A 17kW tractor motor sends drive through a permanent 4WD drop box to the machines’ axles, which incorporate a regenerative braking function, in lieu of conventional brakes, topping up the battery in the process.

The second motor makes 22kW and powers the hydraulic system, using a fixed displacement gear pump to deliver 80l/min flow. Eventual control falls to a proportional joystick acting on an electro-hydraulic valve block, while an integral regeneration system once again tops up the battery during boom lowering and retraction movements.

Fitted with a plug-in charger, the battery can be fully charged in around eight hours via a standard 240V, 16A electrical supply.

An optional rapid charger can complete the task in as little as 35 minutes.  The makers estimate that battery life is around 5000 recharging cycles, said to be the equivalent of 10,000 operating hours.