Keep an eye out for virus-caused disease 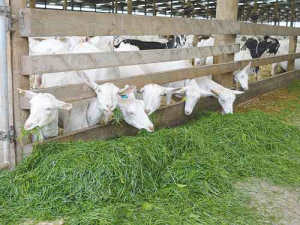 Caprine Arthritis Encephalitis is a virus-caused disease in goat herds.

Caprine arthritis encephalitis (CAE) is a disease of goats caused by a virus.

It is present in many herds in New Zealand and tends to develop into clinical disease when goats are under stress, for example in dairy goats farmed intensively. It has no known cure.

Infection most commonly spreads from infected does to kids via colostrum or milk. The milk from one infected doe going into bulk milk can infect all the kids drinking it.

After infection it can take a long time for the first signs of the disease to appear. In fact, some infected goats show no signs, although they may have reduced productivity, and they can spread the virus to kids and other goats.

The clinical disease takes two main forms: encephalitis (brain inflammation) is the most common form of the disease in kids.

Signs are first seen at age one to four months; affected kids can be bright and alert but they develop a stilted walk then weaken in the back legs until they can’t walk (over two weeks to two months).

Older goats can sometimes get the nervous form too, and this form of the disease can look like another brain disease – cerebral listeriosis – with aimless circling and a head tilt.

Chronic arthritis is the most common form of the disease in mature goats. This form of CAE usually develops later (at age one to two years).

The knees and sometimes other joints swell and the goat becomes lame, often grazing on its knees; joint pain and stiffness increase over time. Again it’s important to distinguish between lameness caused by CAE and lameness caused by other problems such as footrot.

If you think you might have affected goats or if you’d like to make sure you don’t have the disease on your farm, the first step is to get your vet to arrange blood tests.

Accurate diagnosis is important because other diseases can cause similar signs. Generally it’s best to repeat testing after a year or so, as some infected goats take time to give a positive result.

In commercial herds any test-positive goats should be humanely culled. Then with the help of your vet you can do more to get rid of the disease.

Run two herds – one negative and one positive -- and manage them carefully to prevent infection spreading from the positive goats to the negative ones.

Prevent spread from blood test-positive does to their kids via the milk by separating the kids from their dams before they suckle and raising them on bovine colostrum and milk substitutes or milk from known CAE-free does.

If you have a CAE-free herd, it’s wise to make sure it stays clear by having a ‘closed herd’ policy. This means that any goats you introduce should be sourced from CAE-free herds, or they should be blood-tested before joining the herd.

• Dr Marjorie Orr is a lifestyle farmer and veterinarian (retired).

This article first appeared in www.lifestyleblock.co.nz