No regrets after going robotic 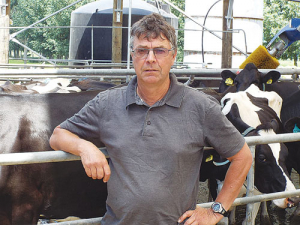 While robotic (voluntary) milking systems appear to be gaining in popularity, the Fisher Farm, between Cambridge and Te Awamutu, has a head start on today’s converts.

Now well into its sixth season, the operation milks 300 cows over 80ha, and lays claim to the title of being the first farm in Waikato to install a DeLaval VMS.

When owner John Fisher first looked at the concept, the farm had a traditional herringbone milking shed without a feed pad, and was operated by two full-time staff and a relief milker.

A visit to the Greenfield Farm at Ruakura set the seed for Fisher to automate and he soon began planning to convert.

Four DeLaval VMS units are housed in a light, airy open-span shed at the heart of the system, complemented by a feed pad, automated drafting gates and cow rotary back-scratchers, reducing labour demand to just 1.5 units.

Today his cows produce about 480kgMS each, and they are said to be calmer and more relaxed, a trait found running through to the owner and the herd manager Brian Wilson. He suggests that because the cows are not being pushed as a mob down the races to the milking shed they suffer less lameness; each cow can pick her own route in her own time.

The conversion entailed a fresh look at farm layout, resulting in a three-way grazing layout that lets animals onto fresh pasture every eight hours.

The cows decide when they wish to be milked, so stroll into the complex where the system decides -- based on yield over the previous 12 hours -- whether milking would be appropriate. This might result in a cycle time as low as six hours or as high as 15 hours before animals move to fresh pasture.

Each cow is treated as an individual, with its own transponder which allows the system to draft cows for breeding or vet inspection, or to direct those that have poor condition to the feed pad for buffer feeding.

“The ability to treat cows as individuals within the mob appears to lengthen their productive life by up to two seasons,” Fisher says.

“Cows appear at the shed at their own pace and are noticeably cleaner, as the competitive nature of a typical milking system has been removed.”

He notes that the regime improves the lives of staff by allowing more flexibility about when they need to be on the farm; and when they are it allows them to complete tasks without having to return to the shed at set milking times. This is important for their family life: they get to attend their children’s school or social events without being “tied to the milking shed”.

Are there any negatives? Fisher says it takes a bit of time to train first-time heifers to come into the complex, enter the VMS system and stand to be milked.