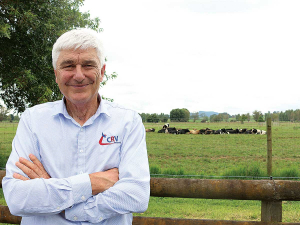 Lincoln University’s recently-published research is the first independent work carried out in New Zealand on pasture-based grazing systems to report that cows with lower milk urea nitrogen (MUN) breeding values have a lower concentration of N in their urine and urinate less total N.

“The results of the Lincoln study were very much in line with our prediction when we released LowN Sires, and it’s really encouraging to see,” says Beatson.

“Farmers can have further confidence that breeding for reduced MUN by using LowN Sires will reduce the amount of N excreted in their daughters’ urine compared to daughters of ‘average’ sires. Modelling predicts that N leaching would also be significantly reduced.

“We envisage this strategy being useful across New Zealand, but particularly on the free-draining soils, where a higher proportion of the urinary nitrogen ends up being leached. Typically, that’s on the light, stony, irrigated soils – and that’s where we see the maximum benefit from these genetics.”

Beatson emphasises that this points to the thinking that those cows that are genetically low for MUN are partitioning the nitrogen they eat differently – away from urine and into other outputs particularly milk protein and faeces. Less urinary N emitted per kg of feed eaten indicates increased efficiency of how nitrogen is used by the animal.

The bonus of breeding is that it is a permanent and easily implemented solution for farmers in their efforts to reduce nitrogen loss and protect our waterways. Breeding for low MUN is likely to be effective across a range of feeding systems.

Beatson says there’s no one silver bullet for nitrogen reduction, but putting together a range of techniques and adopting a range of technologies will enable farmers to produce current volumes of milk within acceptable environmental constraints.

“New Zealand dairy farmers have already made great strides over the past ten years to mitigate the effects of their farming operations on the environment and protect water quality.

“Many dairy farmers understand that they need to make an investment in new innovations that will enable them to farm sustainably.  We’re excited about the part that CRV Ambreed’s LowN Sires can play towards a solution,” says Beatson.