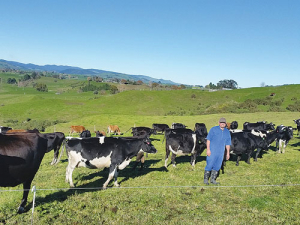 A smaller-herd farm was the affordable option for the them and they now farm in spectacular countryside dotted with volcanic outcrops at Wharepapa South, near Te Awamutu.

They have owned their 52ha farm, milking 131 crossbred cows, for six seasons, working hard to progress their farming careers the traditional way.

Fichtl didn’t start out farming; he had a variety of different roles -- forestry, kiwifruit and working for a silage contractor whose son encouraged him to try dairy farming.

“An ad for a farm worker came up in Taupo and I went for it,” says Fichtl. “It was on a 400ha conversion and I stayed there three years. That was a wake-up call, my first real introduction to farming.”

Debi didn’t start off farming either. “I trained as a radiation therapist and practised for 14 years before having our boys. I then joined Mike on farm.”

“Our parents weren’t able to help us into a farm,” says Fichtl. “So the only option we had was to do it the traditional way, which we did.”

The encouragement of one their bosses was crucial. “The person who influenced me to go 50:50 was Malcolm Ellis at Ngutunui,” says Fichtl. “I was on his farm for two years and he liked to see people move, so we went 50:50 after that. Right from when we got there he was pushing, schooling us to go 50:50. He mentored us through there.” “We bought two houses in Hamilton to increase our equity and then sold them to buy our first herd,” says Debi.

“I still think the goal should be farm ownership,” says Fichtl. “Not everyone will get there. I suppose a lot of people are happy to be a big sharemilker and then exit the industry. But if you are talking about a career, then owning your own farm is the pinnacle. It is an achievement to come through the ranks, and smaller herds are the only way some people will get there.”

Money can be made out of a smaller herd farm, he says.  “A smaller herd, about 350 cows, can still be profitable for a husband and wife team with a worker. You have to be creative; perhaps one of the partners has a good job in town, and the other partner is on the farm, and then they can afford a worker and will get ahead a bit quicker.

“There are many ways to farm ownership. Unless you are on a very big 50:50 job it is difficult to go to a 400-500 cow farm, so we still need stepping stones. This farm is our stepping stone.”

Their off-farm work is an essential way of generating extra income. “For the past three years I have teat sealed for local vets, reared calves at AgResearch Tokanui and had an AB run,” says Debi. “That takes care of eight months of the year and we both relief milk alongside our own farm duties.”

“You need to take time off the farm: it is running a business,” says Fichtl. “If you are having a problem, say with heifer grazing or what to plant, and something comes up, you should go along. Farming is ever-changing and you need to keep up.

“We first came to SMASH during our first year on this farm, and got good information there. Sometimes information can be muddled at industry events, but coming through SMASH it is pretty direct; they choose their speakers well. It is relevant to either what is happening internationally or on-farm.

“For example, when we came to one of their recent field days there was so much information, we were thinking ‘wow’ there was a lot of new stuff, and it all made you really think.

• Louise Hanlon is a member of the Smaller Milk and Supply Herds (SMASH) national committee.