Aiming to be the pick of the crop 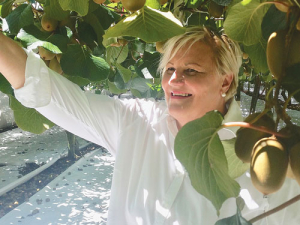 A new horticulture recruitment and training cooperative has started in Te Puke, aiming to smooth the supply of workers to orchards.

It is expected to benefit employers and workers.

Pick BOP is a collaboration between 10 kiwifruit growers in the region, some of which also have contracting businesses.

Manager Phillippa Wright says the cooperative aims to have high standards on employment compliance issues. It also hopes to attract staff by better continuity of employment: workers can be shifted around between the orchards according to workflows.

Wright told Rural News she sees more potential for training for orchard workers. She previously mainly worked in post-harvest but says growers attached to those companies would often ring up looking for training spots for their workers.

Wright says Pick BOP is an opportunity for growers to take a collaborative approach to training.

“If someone asks me for training I can ring around and send out an email asking who else wants to do it instead of them relying on the post-harvest or just doing their own individual training,” she says.

In the future she hopes Pick BOP will have its own supervisor for on-job training.

Wright says they looked at a couple of models for this kind of venture: one was a company operating in the South Island and another was a similar cooperative -- Pick Hawkes Bay -- which also has grower members.

“We want to get RSE workers from the Pacific islands. This is another way of doing that without each individual grower having to manage their own people.

“I took some advice. Apparently, the Pick Hawkes Bay model works well particularly for RSE workers, so we decided to go down that track.”

One aspect they hope will attract workers is the ability to move them among the 10 members.

“For instance, you might have 20 workers picking an orchard. However, when they finish they may not have any more work for two-three days because the fruit is not mature enough or the weather has been bad,” she explains.

“I will be able to move workers from one orchard to another within those 10 members. They will have more continuous work so hopefully that will be an attraction.”

Crucial to get it right

Wright says breaches to workers’ rights and confusion about compliance have the potential to affect horticulture’s reputation and bottom line.

She says the idea behind Pick BOP is to give members access to training and support in areas like recruitment, labour laws and Recognised Seasonal Employer (RSE) management.

The co-operative will keep members up to date with the latest regulations and specialist knowledge so members can be confident they are on the right side of the law and are maintaining high standards.

“We’ve all heard stories of exploited workers and that’s a bad look for the industry and New Zealand exports,” says Wright.

“Pick BOP is a recruitment office with a commitment to best practice, offering high-quality services specific to the horticulture industry.

“International customers are also increasingly looking at a grower’s social responsibility. Making sure staff are well trained and safe are just as important for the bottom line as the product quality, so it’s win-win.”

“What I saw missing was a collaborative solution,” says Wright. “We want to make things transparent for members, by not accepting any non-compliant behaviour.”