Deer man to fly the ‘Coup’ 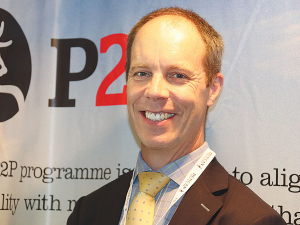 Dan Coup is moving on from Deer NZ after six years.

DINZ chair Ian Walker says Coup can take some credit for the “remarkable turnaround” in industry confidence during his tenure.

“I guess you can only see these things in hindsight, but when I started in 2013 the deer industry was an unhappy place, particularly farmers,” Coup told Rural News.

“They were voting with their feet and leaving the industry or they were turning up at industry meetings and expressing how unhappy they were.

“The ones who were passionate deer farmers and wanted to stay deer farming, they were the ones that came along and let us know they were unhappy.” They wanted to be deer farming “but they could also look across the fence and see more profitable alternatives”.

In hindsight, he says, it was a pretty tough start to his job as chief executive.

Lots of people were coming up with good ideas on how to turn things around. They put all that together in a programme called Passion2Profit and managed to get it over the line with the Government as a Primary Growth Partnership (PGP) project.

“We got enough support from our farmers to get started on some of those projects and they started to make a difference,” he said.

“It has been a pretty positive experience going from that time when people were unhappy to now, when most of the farmers are feeling reasonably confident about their lot in deer farming.”

The seven year $7.3 million Passion2Profit is one of the main cornerstones of the turnaround, Coup believes.

“Markets have continued to improve for both venison and velvet. A little bit of that is within our control but largely that’s the market being the market.

“We can take credit for some of the improvement in confidence but you’ve got to acknowledge there is a fair bit of good fortune in there as well.”

In venison and velvet one pleasing shift was more cohesion in how their marketers go about their business.

“With the venison as part of the PGP project we’ve had this relaunch of Cervena which is a brand owned by all the industry and all the marketers. They have worked collaboratively to launch that appellation to Europe.

“It’s a reasonably small success but a success nonetheless. It is modest volume. The rewarding thing has been seeing the marketers work together to make a success of that exercise.”

A successful project to come out of the PGP was the Advanced Parties Project. Sitting groups of deer farmers regularly meet and support each other, particularly in farming productivity projects and in lots of other ways.

“We have a bit more cohesion among the deer farmers out there. We’re starting to make them feel a bit more like they are part of a club they might want to belong to. They have other peers out there who will support them and help them in their enterprises.”

There’s definitely more to be done in the deer industry, he says.

“I guess you never finish. There are lots of opportunities and challenges.

“The main challenge is this big wave of regulatory change that will affect all farmers including deer farmers, particular on environmental issues, be they water quality or climate change or biodiversity.

“The deer industry is well placed to cope with that.”

Opportunities for deer products worldwide are only going to increase with people’s interest in ethical and clean proteins, he says.

“The deer industry has some fantastic products that will meet society’s desires about what they want to eat and put in their bodies.

“Really good opportunities [exist] for the deer industry. It can only continue to improve as a business and a lifestyle for deer farmers.”

He says he loves working with the DINZ team, farmers and other industry members. “They are a great bunch of bosses to have.”

The deer industry works with a great extended family, eg vets and stock agents, all part of the industry’s success.

“But it has been six years and after that time it is right for DINZ and for me to have some fresh thinking.”

Coup says he is sad to be leaving the deer industry, but excited about his new role as well.

Related to that regulatory challenge, there are a lot of New Zealand society perceptions of the primary sector which are not positive, he says.

“QEII and other organisations have a great opportunity to accentuate the positive and get more recognition of the great work farmers are already doing and will do over time in environmental care.

“Farmers of all types do some great stuff in caring for the environment, [partly] through QEII.

“We need to get society more aware about those positive things alongside their concerns about additional things that need to be done by farmers.

“Farmers need to be seen as the solution to a whole lot of society’s concerns and be recognised as part of the solution rather than just bad guys all the time.”