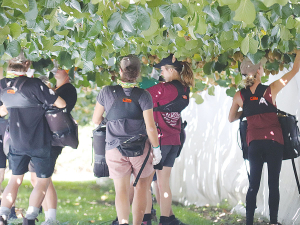 A new farm work visa proposed by Australia could cause more misery for labour-strapped New Zealand farmers and growers.

By the end of this year, the new visa will be in place, ending a requirement for British backpackers to work on Australian farms for 88 days.

The visa will be extended to 10 ASEAN nations: Brunei, Cambodia, Indonesia, Laos, Malaysia, Myanmar, the Philippines, Singapore, Thailand, and Vietnam.

New Zealand's dairy industry is a popular destinations for Philippine workers but they could soon be heading to Australia.

"By not looking after them, by shifting the goal post for them to work toward residency, by stopping them reuniting with their families and not keeping their positions in NZ."

Herrick says the NZ Government can definitely learn from the Aussies.

"Otherwise, our situation is only going to keep getting worse as migrants keep leaving for better options," he says.

The farm work visa has been the brainchild of the Minister for Agriculture, Drought and Emergency Management, David Littleproud, the deputy of the National Party, the junior partner in the Coalition Government.

Littleproud says the announcement of a new seasonal agriculture worker visa will come as huge relief to the agriculture industry that has been crying out for a secure workforce.

"The new seasonal agricultural worker visa would mirror the existing Seasonal Worker Programme and will add to the pool of workers available to work on Australian farms."

Australian peak farmer body National Farmers' Federation welcomed the announcement but noted that it was a long time coming. NFF Horticulture Council chair, Fiona Simson, said it was critical the Government nailed the details of the visa and delivered effective relief for the sector's workforce woes.

"The NFF Horticulture Council has led the charge in calling for this visa solution for several years, and we give credit to the Nationals leadership for bringing it close to reality.

"But we'll be forgiven for being a little cynical, having heard similar announcements and supportive words stretching back to 2018. What matters now is that industry and government work collaboratively to design a scheme that will deliver genuine and effective relief to farmers.

"It needs to be flexible and portable - keeping red tape to a minimum and letting workers move between jobs with ease," Simson said.