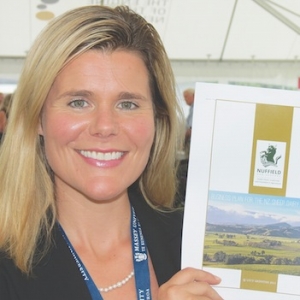 Griffiths recently completed her Nuffield scholarship project on the sheep milk industry, travelling three months in the UK, France, Israel, Italy, Switzerland and the USA to compile her report.

She chose this industry because of its potential to help double New Zealand’s exports and because of her marketing work with a sheepmilk cheese maker in Wairarapa.

“We have one of the biggest sheep dairies in the world here – Blue River, with 20,000 ewes. We are leaders in bovine dairy, we are the leaders in sheep farming so why can’t we be the leaders in dairy sheep?’ she told Rural News.

“However, we are competing with traditional sheep milk countries like Spain, Italy and France, producers of sheep milk and cheese for centuries. For example, Roquefort in France, with 1700 suppliers, has produced cheese since 79CE. Today they produce some of the most expensive cheeses in the world.

“So we have competitors in cheese, but there is a lot of opportunity for us in the gourmet food market (butter, yoghurt, milk, fresh milk and ice-cream) and in functional foods, sports nutrition, UHT and infant formula.”

Griffiths notes that worldwide at least 10 million tonnes of sheep milk are produced annually, the largest producers being China and Turkey.  And though New Zealand could not reach such volumes it has the capacity to produce for high-value, niche markets.

New Zealand’s many advantages include its world leadership in sheep farming, breeding, technology and research, Griffiths says. Our farmers are good adopters and developers of milking technology and some of the main sheep milking breeds, e.g. East Friesian and Awassi,  are here.

She concedes the challenges in developing a large sheep milk industry in New Zealand: the lack of a strong tradition of sheep milk consumption, limited flocks of milking sheep breeds, and few people with experience to run sheep milk operations.

“But sheep dairy has the potential to be a billion dollar industry in 10 years if the right breeding programmes, feed mixes and other technologies are implemented. Demand for sheep milk products is growing worldwide driven by health, tradition and fashion.” 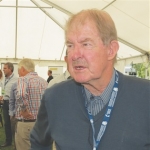