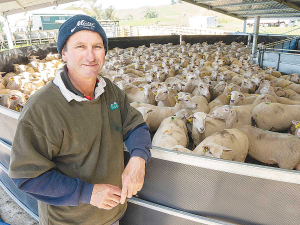 Paul White, at Green Park Sheep, the farm is expanding its milking ewe flock, from 850 to 1200, for its second season.

Allan Browne and Paul White were among the frst farmers to enter the dairy sheep industry under the Maui Sheep Milk banner in 2020.

Browne Pastoral's final day of milking for the first season was on April 16 and Allan Browne said overall milk production had been better than expected.

"We've produced more than twice the forecast amount of milk we were meant to have made. So we've had to change to a larger vat, which I guess is a good problem to have."

Allan said there will be a few tweaks to the farm's management plan before the start of the new season.

"We were reactive rather than proactive to feeding. Pasture went off in quality and we were slow to react to that.

"This coming season we'll introduce a higher protein feed as the quality of the grass begins to lower."

Allan said the internal rotary milking system performed well. It had good flow once the animals were trained.

"We had little in the way of udder health problems so we can say we are pleased in that respect.

Allan thinks the farm may move up to 1,600 milking eyes for the new season, and possibly 2,000 the following year.

"We're not limited by land but really it's about how far the sheep can walk to the shed."

He said the family came from a sheep meat and wool farming background and had only moved into dairy cows seven years ago, so dairy sheep was still a new experience.

"We've used what we would normally do to fatten lambs as the basis to make milk and that's served us better than any dairy cow type of approach.

"They say what makes fat on a lamb's back makes milk in the vat, and that seems to be the case for us."

Green Park Sheep dried off its ewes in early April and Paul White said the new venture had met its milk production target for the first season.

"It's been a huge learning curve but Brad and Kieran are still enjoying it and that's the main thing."

The Agili inline milking system was converted from an old herringbone shed and it had performed well for the family during its first season.

"Brad and Kieran were milking about 680 sheep in an hour towards the end of the season, so it was really flying."

Outside of the shed, the family was looking to make changes to its lamb rearing programme in particular.

"Lamb rearing was a little bit more challenging than we thought.

"We are putting in a new rearing shed because we believe we can manage the animals better that way."

Paul said the rearing shed would allow the farm to move the lambs off the ewes earlier than last season, and that would give them an extra month of milk production.

There were also some tweaks to be made to the farm's fences which were put to the test by the lambs last year.

Green Park Sheep was also looking at expanding the flock to 1,200 milking ewes for next season.

Paul said they planned to start lambing in late July 20 and begin milking for the new season in August. 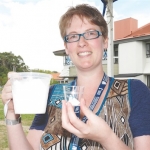