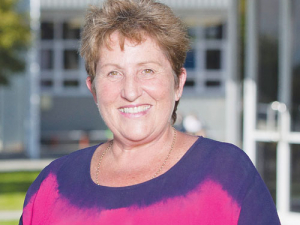 “The parents won’t let their kids do it, in some cases because they see it as just where you go if you’re not very bright,” Koster told Rural News.

“And they don’t realise the amount of potential for earnings if their kids are bright and have done the ag science or hort science degree.

“Even if you haven’t done the degrees you can go straight from year 12, go to a dairy farm, work your way up to manager and be earning $110,000 plus a free house, free vehicle, food, power by age 22 or 23 years – if you are a good worker. Parents don’t realise that.”

Despite recently selling some land for residential development, the school, located on the eastern edge of the North Canterbury town, still runs its own 20ha farm.

A part is leased to another institution, the North Canterbury Community College, to run equine courses and some is set up for horticulture studies taught in year 10. But most is in forage crops grazing sheep and cattle.

The school commonly takes on dairy cows that have scanned as dry, keeps them through the winter then sells them.

Agricultural studies are a significant part of the school’s programme. From a total roll of 1640, about 500 students a year are involved – about 350 full-time equivalents after allowing for junior courses that each runs for only half a year.

Academic agricultural science through to year 13 and aimed at students intending to take university degrees;

A rural skills course which also goes to year 13 and is aimed at students who want to work on farms or go to Lincoln for diploma-level studies such as dip ag or dip farm management;

Primary industry trade academy, in which year 12 students work on commercial farms one day a week, all year; this is for students who definitely want to go farming. If they don’t immediately get a farm job they might return for year 13, doing two days a week onfarm.

The school teaches animal husbandry in years 9 and 10, before the students decide which way they’re going to go. It also teaches horticulture to the juniors, but Koster says the students “like animals too much” for the school to continue offering it in later years.

Rangiora High School serves a large rural catchment stretching from Waipara to the Waimakariri River (apart from Kaiapoi). Koster says not all the students doing agriculture are farm kids, however. The rise of lifestyle subdivisions – particularly in the Waimakariri end of the catchment – means most students in the courses are now “lifestyle block kids” rather than from traditional farms.

Koster attended the school during the early days of the lifestyle block movement.

“30 years ago most would have been on true farms. I went to school here and we were on a lifestyle block, but we were the exception to the rule.”