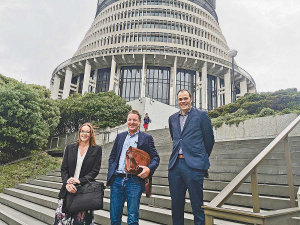 Federated Farmers team of Kim Reilly (l), Jim Greenslade and Peter Wilson outside parliament after making their submission to the Environment Select Committee.

“The Crown Pastoral Land Reform Bill is a solution looking for a problem, and is unnecessary, counterproductive and potentially unlawful,” Federated Farmers South Island policy manager Kim Reilly told the Environment Select Committee that is overseeing the bill.

“The existing contractual relationship [under the Crown Pastoral Land system] based on trust and reciprocity would be replaced by an approach of regulation, policing and enforcement.”

Reilly says the bill – as proposed – reduces the certainty of leases and the incentives for farmers to continue to invest in enhanced environmental outcomes.

“The bill adds nothing except unnecessary costs, delays, complexity and red tape.”

South Island farmer and Federated Farmers High Country member Jim Greenslade said a flaw of the bill – as has become apparent with the Essential Freshwater regulations – is its one-size-fits-all approach.

“High country farmers were very aware of land stewardship responsibilities, in particular so they can pass the Crown lease properties they have worked hard to look after and improve to the next generation,” he told the select committee. “But improving the land, fencing wetlands and managing pest animals and weeds is expensive.”

Greenslade warns that the proposed pastoral land reform legislation would undermine that incentive and see money that farmers could spend on that work instead be swallowed by lawyers, consultants and consents.

Federated Farmers has also questioned the lawfulness of many of the changes proposed.

“In our view, there are serious questions around the principles of natural justice, and a significant and unjust erosion of the lessee interests and rights,” Reilly added.

High Country Accord Trust chair Philip Todhunter reckons the provisions of the bill put at risk the outcomes and objectives it claims to promote.

Writing on the Newsroom website, he says that “numerous drafting errors” plague the Crown Pastoral Land Reform Bill, which make it “farcical”.

“Requiring a consent to carry out fencing work necessary to comply with other regulations, or to replace a stock water trough; the almost impossible list of conditions that need to be met to clear invasive exotic plants without a consent – even though the terms of the lease require that work to be done.”

“Removing a few sheep will not in and of itself enhance biodiversity,” he argues.

“That requires active management: plant and animal pest control initiatives, planting programmes, soil conservation initiatives. Most leaseholders do that work now – because the terms of their lease require it.”

Todhunter says requiring farmers to get a consent – at a cost – to carry out day-to-day farming operations will not encourage this behaviour.

Meanwhile, ACT’s agriculture spokesman Mark Cameron has accused the Government of showing “extreme arrogance” in its stance toward farmers who are opposed to the Crown Pastoral Land Reform Bill.

“The Government knows the bill will impose significant costs on farmers for little or no environmental gain but they just won’t admit it,” Cameron claims.

He says farmers are opposed to it because the bill allows for a takeover of high country farms by stealth. Cameron accuses the Government of using environment concerns as a pretext. “The gap between how this bill will impact farmers and how the Government is portraying it could not be starker,” he adds.

Todhunter says that restricting leaseholders’ ability to farm profitably will also reduce the funds available for environmental enhancements above and beyond the bare minimum.

“Currently, almost all lessees are actively engaged in weed and pest control over and above their contractual obligations,” he adds. “A number have formal conservation covenants; many have informal conservation plans or detailed integrated farm management plans.”

Submission hearings before the Environment Select Committee are underway, with almost 2,000 public submissions.

However, there is concern that the select committee is chaired by Greens MP Eugenie Sage.

She was the minister in charge of introducing the Bill at its first reading in the previous Parliament.

"Being before the Environment Select Committee with a conflict of interest is a concern being expressed by so many, it will hang over this Bill all the way," Waitaki MP Jacqui Dean says.

Dean, who is National's conservation spokesman, says she has tried to address Sage's conflict of issue, but says declaring expression of interest is up to the chair.

"I have clearly expressed the concern, asked questions, and quite frankly, I don't even know if a lot of attention has been paid (to this Bill), they have just rubber-stamped it."

Dean says high country farmers are facing one of the biggest battles of their lifetime and the reform Bill will "cast aside pastoral farming rights over the environment."