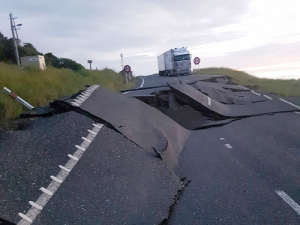 A road by Kaikoura, the hardest hit. Photo: MarlboroughEmergency.

Key was scheduled to depart tomorrow for Buenos Aires, Argentina for a series of meetings aimed at strengthening New Zealand’s trade, economic and political ties with the region, before travelling to Lima to attend APEC.

As a result of last night’s earthquake, Key has made the decision to postpone his visit to Argentina.

“The situation is still unfolding and we don’t yet know the full extent of the damage,” Key says.

“I believe it is better that I remain in New Zealand in the coming days to offer my assistance and support until we have a better understanding of the event’s full impact.

“I want to thank Civil Defence and emergency services around the country who responded so rapidly, and also those New Zealanders who supported the large number of people who were evacuated.

“My officials have conveyed our apologies to the Argentine Government and I intend to call President Mauricio Macri in the next few days.”

The decision on whether the trip to APEC will go ahead will be made later this week.