Remarkable lambing in a challenging year 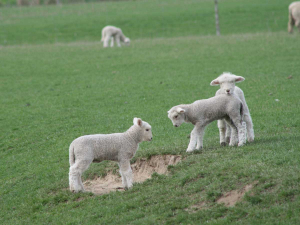 Despite Covid-19 restrictions, farmers achieved a near record lambing percentage according to a B+LNZ report.

Despite Covid-19-related processing restrictions and a widespread drought in the first half of 2020, sheep and beef farmers despite achieved a near record 130.3% lambing percentage, slightly lower than spring 2019 where 131% lambing was achieved.

This is the findings of the Beef + Lamb New Zealand (B+LNZ) Lamb Crop Outlook report for 2020 that measures the lambing performance and forecasts lamb and sheep exports for 2021.

Lamb and sheep export volumes, however, are expected to be more significantly impacted by the follow-on impacts of the drought, due to lower animal weights and the retention of sheep for breeding to rebuild stock numbers.

"Despite the challenges of 2020, including drought and Covid-19, sheep farmers demonstrated why they are the world's best," said B+LNZ chief executive Sam McIvor.

"Their resilience and the agility of their farming systems has meant they've performed outstandingly and this should be a real point of pride for our sector," she said.

Most of the decline occurred in the North Island as a result of drought conditions.

McIvor says that although the average lambing percentage is lower, 2019 was a high performing season.

The number of lambs tailed in the North Island declined 4.8% to 10.8 million head.

Restricted feed supplies at mating resulted in lower pregnancy rates when scanning was completed. The severity of the autumn drought on the lamb crop was partially offset, however, by excellent climatic conditions at lambing.

The most severe impact was in the East Coast, with the total lamb crop for the region down 10%.

The annual amount of lamb produced is expected to decrease 4.7% due to a combination of fewer lambs and a slightly lower average carcase weight.

The sharp decline by a 16.3% decline in the North Island as sheep farmers after the number of breeding ewes sold in 2020 was higher than expected because of drought.

Initial reaction to the Climate Change Commission report has been generally muted, but there are some concerns in the agricultural sector.