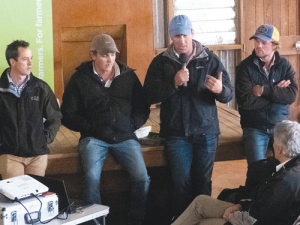 Farmers are hearing that Beef + Lamb NZ is “putting your money where our mouth is” as it launches an innovative research partnership.

Chief executive Sam McIvor made the remark at the formal launch of the North Canterbury Future Farm, a 50:50 farming partnership between BLNZ and a company formed by local farmers.

Together they are leasing Lanercost Farm, a 1310ha sheep and beef property in the Leader Valley, north of Cheviot in North Canterbury.

They will run it as a demonstration or model farm to test new methods and technologies.

McIvor said farmers want to know how to respond to the demands of customers, regulators and wider society while still running a profitable business. Other research models could test individual components, but the Future Farm could test within a whole farm system, said McIvor.

They hoped to operate in the top 5% of profitability for comparable farms, while aiming to develop people and industry leaders, demonstrate best practice and be customer focussed, McIvor says.

Lanercost’s operation will be fully transparent so other farmers could take “confidence and caution” from what it does or does not achieve. The farm will take calculated risks on new technologies and techniques “so you don’t have to,” he said.

Chairman Andrew Morrison said BLNZ had never gone into a lease operation before.

“In some people’s minds that’s a little uncomfortable, but if we’re going to demonstrate and make the changes we have to make, we’re going to have to do that.”

Transparency will be crucial and extension a big part of the operation.

Morrison says the sector is facing the challenges of alternative proteins, perceptions of animal welfare and water quality and farming’s impact on climate change.

“Let’s make this as transparent as we can -- for Government, for regional councils, for New Zealand and for our consumers.

“We know we’re rowing the boat out here. There are risks associated with this. We haven’t been in this space before in leasing farms. We will be judged on performance.”

BLNZ’s partner is a company formed by the landowner, Julia Whelan, with locals Simon Lee and Carl Forrester. They’ve employed Digby Heard and Tim Waghorn as manager and 2IC. All have strong local links.

Forrester, now an AFFCO livestock buyer, had previously worked on the farm as a teenager.

“I’ve always had a bit of a connection with Lanercost. I think it’s awesome the way it’s set up and laid out. I always thought if the opportunity ever came up that I’d love to be involved in the property one way or another,” he said.

The group took over the property on April 1 and set about restocking after the previous lessee vacated with all stock and plant. It is now running 7000 stock units including 300 beef cows and 3500 ewes.

Lanercost consists of a mix of fertile flats, rolling downs and steep hill country and includes 20ha of QEII Covenant and a 20ha forestry block.

Lee says they are setting it up on a “real low capital” basis and started with nothing. “We’ve got a tractor, but we don’t have anything to tow behind it.”

The group said it would have leased the farm even without the BLNZ involvement, which was only confirmed in October when Lanercost was chosen ahead of a number of other candidates for the Future Farm project.

Morrison says the idea had been 18-24 months in gestation. BLNZ is planning for more Future Farm partnerships elsewhere, but he could not yet say how many. “We’ll get started and see how this one runs.”

Although it is getting into a non-traditional area, BLNZ is already spending on R&D projects like the pastoral greenhouse gas research consortium, beef and lamb genetics and pastoral genomics, Morrison says.