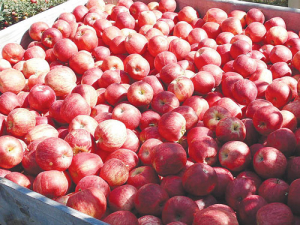 This year’s apple crop is expected to be of high quality.

However, New Zealand Apples & Pears chief executive Alan Pollard says the result of the good growing season can be seen in fruit quality.

“Most notable about this year’s crop is the exceptional quality of the fruit. Consumers can expect to receive the high-quality apples and pears that NZ is renowned for.”

Despite hail in Central Otago, growing conditions across the rest of New Zealand this season have been very good, he says.

“Adequate rainfall means that all regions have good quantities of irrigation water, and sunlight and warmth are at some of the best levels that we have seen.”

A key to the success of the NZ industry is the continued diversification of varieties available world-wide.

“The broad portfolio of varieties that we offer has changed dramatically since the mid-2000s, when Royal Gala and Braeburn accounted for almost 80% of NZ exports,” says Pollard.

“Today, Royal Gala remains our largest export variety accounting for around 30% of total exports. But varieties such as Braeburn continue to decline: that particular variety’s planted area was down 7% over 2018 and export volumes are expected to be down 8% for 2019.”

The industry expects average fruit size to be smaller than in 2018, with the season running 5 to 7 days later than in 2018 in Hawkes Bay and about the same timing as 2018 in Nelson.

The area planted in apples and pears continues to increase at about 3% to 4% per annum and is now at 10,189ha.

Meanwhile, a new partnership claims that new, superior tasting apples and pears able to thrive in the planet’s warming climate will soon be available to fruit growers worldwide.

T&G Global (formerly Turners & Growers) has joined NZ’s Plant & Food Research, the Institute of Agriculture and Food Research Technology (IRTA) and Fruit Futur – the latter two both in Spain -- as the exclusive partner in commercialising new apple and pear cultivars designed to withstand sunburn, colour and firmness associated with the warming global climate.

The Hot Climate Programme (HCP) was initiated in 2002 by Plant & Food Research and IRTA to address challenges faced by Spanish growers, particularly in the Catalan region, with traditional apple and pear varieties. They endure hot seasons with increased sunburn, low colour, compromised fruit textures and higher incidence of storage disorders.

It was recognised that other apple and pear growing regions will begin to experience these issues as the global climate changes, and that varieties developed for these niche environments would be in increasing demand worldwide.

T&G Global’s successes include launching award-winning JAZZ and Envy apples in Europe, US and Asia.

“These hot climate-tolerant new varieties will… provide growers with varieties primed for production in this changing environment.

“We know that whatever the weather, we will be able to bring several outstanding new apple varieties to market and grow fruit in regions that we wouldn’t usually have considered suitable for growing apples and pears.”

The apple and pear industry has this month gained funding to help prepare and manage biosecurity threats, from the Government’s MPI Sustainable Farming Fund.

“This grant will help us ensure the industry is ready and able to protect against a range of biosecurity threats, including fruit fly and brown marmorated stink bug (BMSB).

“Our industry is moving to implement a more proactive and connected response, working with the public as a stronger force to fight any incursion of NZ shores

“We’ve had fruit fly, the stink bug is on the horizon and we must prepare now for whatever comes next,” says Robertson.

The grant will fund a three-year programme including response options for apple and pear growers, treatment and control options for fruit fly and BMSB, implementing biosecurity hubs in the growing regions and training members.

NZAPI will work with the entire industry to get the most out of the project, including greater public awareness.