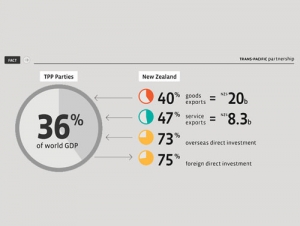 More info, including infographics like this, can be found at www.tpp.mfat.govt.nz

Trade Minister Todd McClay announced the start of Parliamentary treaty examination of the TPP, following signature of the agreement on February 4.

"The Government has presented the final text of TPP, together with its National Interest Analysis (NIA), to the House of Representatives for treaty examination by the Foreign Affairs, Defence and Trade Select Committee," says McClay.

"During Parliamentary treaty examination, the Foreign Affairs, Defence and Trade Committee can choose to call for public submissions. After it has completed its treaty examination, it will then report back to the House of Representatives and, if it chooses, make recommendations to the Government."

Alongside these documents, the Government also presented the text of four intellectual property treaties to which New Zealand will need to accede under TPP, along with the separate National Impact Analyses required for each of those treaties.

"Legislative changes required in order to implement TPP will be introduced to Parliament at a later stage, and go through normal Parliamentary procedures.

"The full set of legislative changes that will need to be taken up by this Bill is set out in the NIA.

"Only when these steps have been completed, and other countries have completed their own domestic approval procedures, will TPP be able to enter into force."

The Government will also be running a number of road shows and hui-a-iwi after signature for interested members of the public, and to assist businesses with preparation for TPP's entry into force.

The TPP NIA is available at www.tpp.mfat.govt.nz

OPINION: A mate of the Hound was invited to a lockup at Parliament on last month’s climate change agreement with the ag sector.