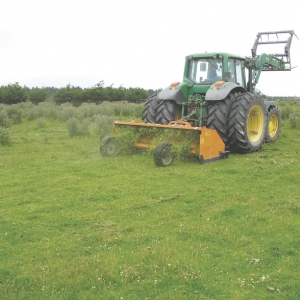 He uses the mulchers for the crop dividing arm of his business which removes the male plants in hybrid crops following pollination so the female seed can be harvested for export.

“We’re independent contractors who service most of the small-seed companies between Oamaru and Kaikoura. The mulchers do a power of work, completely breaking down the male plants in a range of crops such as carrots, canola, red beet and Swiss chard. They produce fine mulch which is then returned to the soil.”

“I’d seen similar mulchers used by other companies, but decided to go with the Berti…. The [price] may be slightly more than some of the other brands on the market but value for money is way above the rest.

“We’ve never had a mechanical issue such as having to replace a gearbox or bearing. They just keep going and going.”

The Berti is built to “withstand severe punishment,” Farmgard says. Its RHS headstock and double-row self-aligning bearings on a 60mm stub shaft make it a heavyweight. “The Berti machines have an extremely tough, robust construction which handles any conditions we throw at them.”

High rotation speed leaves a fine mulch with no build-up of windrows. It wipes out thistles, reduces rushes and mulches crop residues, gorse, tussock and scrub in one pass.

Donaldson buys his mulchers through Claas Canterbury, with backup and parts support provided by Farmgard. “Nothing is ever a problem. We go through two sets of hammers on each machine per season and they always have them on hand when we need them.”

He replaces the mulchers every four years to maintain a modern fleet, and says their resale value is another big plus.“We look after the machines and they hold their value extremely well. We have no trouble selling them on, mainly to farmers who want a mulcher for cleaning up their fence lines or general tidying work.”

Founded in 1955, Pukekohe-based Fieldmaster is well known New Zealand-wide for its mowing and post driving equipment for the agricultural, orchard, viticulture and municipal sectors.