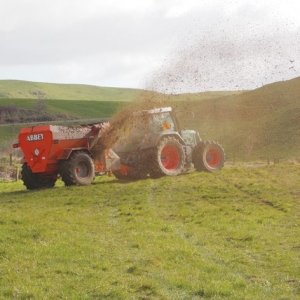 “We’ve done a lot of work with the spreader which is strong, tough and spreads evenly. The proof is [most of] the clients we work for ring up and say what a great machine it is and what an excellent job it has done.”

Greg and his son John run Langman Agricultural Contracting from Te Pahu, west of Hamilton, offering many services including harvesting, hay and silage, and cartage.

“John added some youthful enthusiasm to the business when he joined me about eight years ago,” Greg says. “Since then we’ve expanded into a whole lot of new areas, including effluent spreading.”

They looked at several spreader makes and models before deciding on the Abbey AP900. “At the time the AP900 was a new concept and there was nothing quite like it on the market. It has proved an excellent machine, giving us full control over the effluent spread.”

The Abbey multi-spreader has a large diameter heavy-duty auger designed to create an even flow of material without clogging. Its drum improves the flow of material, the base of which is fitted with a double skin for chassis strength and durability.

Although dairy effluent is the main by-product spread by the Langmans, they have also used the Abbey for spreading bedding matter from cow stand-off pads, chicken manure prior to maize planting, cleanings from goat and calf sheds, and drain cleanings.

“If it’s spreadable, this machine will handle it.”

They like the spreader’s side delivery, throwing material away from drains and waterways, and down sidelings, with ease.

“The application is precise, eliminating the possibility of effluent leaching into waterways. It is more accurate than a rear discharging spreader, on which the operator has to judge for himself the distance to the water.”

Conversely, the spreader can spread effluent up to 50-60m “when you open it up”, says Greg.

Overall, he finds the AP900 “user friendly” with good visibility during operation.

“It is well suited to New Zealand conditions with large tyres for flotation on softer ground and no hindrance when the machine is working on hills.”

The machine is easy to service, is watertight and can spread effluent with high water content without it draining out of the machine.

The firm also has an Abbey tanker which works in tandem with the spreader.