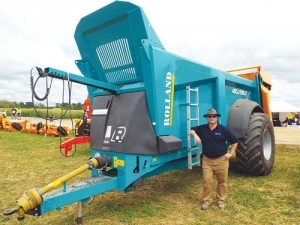 Based in northwest France, Rolland operates from a 50,000m2 factory and is celebrating 2016 as its 70th anniversary. Its first product was a wooden manure spreader.

The Rollforce range of heavy-duty machines is aimed at contractors and large scale farmers. Each is identified by numbers on the side of the body, the first two digits referring to body length and the latter to the capacity in cubic metres.

Attention to detail is notable: the metalwork undergoes a process of shotblasting, followed by phosphating and electroplating, before a high quality two-pack top coat is applied. During the process the material is oven-baked twice ensuring a long service life.

At the front of the machine a wide, A-framed drawbar layout aids strength and stability when combined with the standard vertical spring, or optional hydraulic damping, said to promote a smoother ride. Oversize wheels and tyres also help with stability and more importantly reduce the rolling resistance, making the spreaders easier to pull off-road.
Also up front, the self-contained hydraulics require only a pto drive and electrical connection to the tractor, preventing cross-contamination of hydraulic fluids, and is further enhanced by the DPA system that automatically adjusts the bed speed irrespective of the tractor's forward speed, to maintain constant application rates.

The front panel of the spreader body allows the operator a view of the load and its progress, and 16mm marine-grade floor chains work with channel-profiled slats to take the load rearwards. 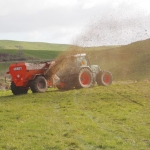 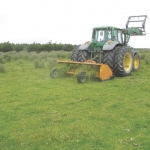