Footwear biosecurity in the boot 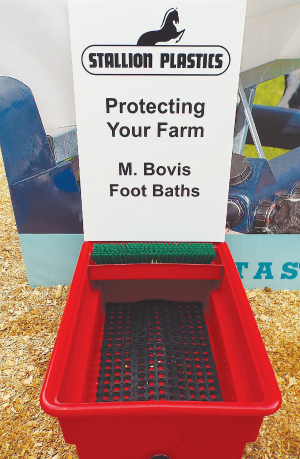 The Jackson Cube is an all-in-one boot cleaning and disinfecting system.

The Jacson Cube, a compact, lightweight, all-in-one boot cleaning and disinfecting system folds up for the boot of a car or ute.

It’s the idea of business partners Rusty Knutson and Jacqui Humm of Jacson3, developed over the last two years.

The idea emerged when Knutson, collecting calves for export, saw many farmers struggling to restrict the spread of diseases such as rotavirus and cryptosporidium between mobs of animals.

Thorough cleaning and disinfecting of boots on entry and exit from each property was obviously difficult to do well with just a basic bucket, brush, and spray bottle combo.

So came the Jacson Cube for cleaning and disinfecting lots of shoes.

It’s made from heavy polypropylene; the three main components -- body, lid and car-boot tray/footbath -- weigh 10kg empty and 15kg when filled with water or disinfectant.

It takes one minute to set up and two to pack away.

A rotating brush is mounted on an aluminium spindle which is mounted to a rhino-plastic grating that keeps debris and contaminants away from the body.

A hand-brush can be used to shift stubborn debris while using the integrated handle in the lid for support. An integral power-spray applicator draws disinfectant from a 3L reservoir and uses a spray tip with enough pressure to shift debris.

For set-up the unit is connected by a 13-15mm hose-tail, from where liquid is directed upwards into the brush assembly. From here it cascades over and under the footwear, whose motion causes the brush to rotate.

It’s also designed for use without a water source, by using the integral reservoir, carried in a vehicle boot; this can double as a footbath if used with an optional integral disinfectant mat. 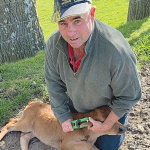 Bay of Plenty dairy farmer Darryl Jensen rears calves and sees farm biosecurity as a necessity. For effective traceability and disease management he operates a ‘closed farm system’ along with a beef farmer and grazier

The days are gone when you may wear on a farm the shoes you have worn on overseas trips, says Feds biosecurity spokeswoman Karen Williams.