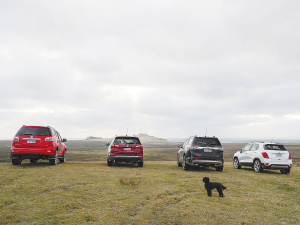 Determined to reinvent itself as an adventurous SUV brand, Holden recently invaded the far flung Chatham Islands, shipping in its entire SUV range and an army of motoring journalists.

Holden’s reason for staging this brand reboot on the Chathams was a bit tenuous: it is claimed the Chatham Islands rose from the sea 65 million years ago, and this year Holden celebrates its 65th anniversary in New Zealand. Well, the numbers match. And if they wanted to mark this milestone with the big SUV adventure to end them all, they came to the right place. To be fair, they delivered on that goal.

Before we boarded the Air Chathams Convair 580 turbo prop for the 2.5 hour flight, PR man Ed Finn said all 650 people on the islands knew Holden was in town and “there’s a lot of positive chatter on the bush telegraph” about the impending invasion. The locals were looking forward to showing us the best the islands had to offer, and as it turned out that’s exactly what they did.

Lying 860km due east of Christchurch and covering just 966 sq km way out in the roaring forties, the Chatham Islands aren’t just a “far-flung outcrop of NZ” as Holden described the place. It feels like a different country. Indeed that’s how the locals seem to view themselves, referring not to “the mainland” but to “New Zealand”. Part of it, but – after at least 800 years of isolated habitation – not part of it.

So, five briefly clean and shiny SUVs set out in convoy across the largest island, Chatham Island -- 90,000ha of mostly flat, low-lying country where the vegetation is all hunkered down and bent to the brutal winds that howl in from the South Pacific.

Dead rusted-out vehicles are a common sight, testament to the salt-laden conditions.

Luckily it was dry, as the Holdens were all running road rubber. The fleet consisted of the compact yet capable Trax, the mid-size Equinox, the big and brash Acadia, the Colorado-based Trailblazer – a true off-roader, and the smart executive’s Calais Tourer – not a true off-roader.

The roads are almost exclusively gravel and quite well maintained. All the cars handled them with ease, proving comfortable and capable. Off-road, the only vehicle that had trouble with the deeper ruts was the Tourer, lacking the approach and departure angles of the other cars and having only 142mm ground clearance. It’s a great all-road car though, with a 3.6L V6 engine supplying 235kW at 6800rpm and 381Nm at 5200 rpm to all four wheels on demand.

The big Acadia shares the same engine and despite not being a true ladder-on-frame SUV like the Trailblazer, it cleared the off-road sections with all its bodywork and undercarriage intact.

It’s a big rig and a real alternative to the Highlander.

If it is too big for you, the mid-sized Equinox is also well suited to most Kiwi adventures.

The Equinox is the most popular SUV in the General Motors global vehicle range and is sold in 116 markets. Its 2.0L turbo petrol engine delivers 188kW of power and 353Nm of torque.

Generally, it impressed in this harsh environment and is dynamically sound on all road types, with enough ground clearance for some light off-roading.

The compact Trax was a surprise, going where the 4WDs went despite only having 2WD. It went everywhere we pointed it, only bottoming out at speeds, umm, not suited to the conditions. The 1.4L turbo engine is a willing performer and the car felt solid and planted on gravel roads.

The only one the locals would have considered buying, largely because it was the only diesel and petrol costs about $3.50/L, is the Trailblazer.

The Trailblazer LTZ has a 2.8L Duramax diesel engine with 147kW of power and 500Nm of torque in the automatic model.

It runs a 6-speed automatic transmission with shift-on-the-fly 4WD and tows 3000kg. It felt more at home on the Chathams, capable of doing it all.

Based on a truck, it felt substantial, grunty and durable – just what you’d need on the harsh, salty islands where vehicles go to die.