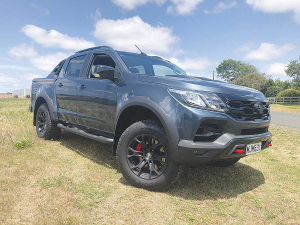 GM’s decision to axe the Holden brand means the SportsCat 2 will be the last of its kind.

Buyers of flash utes are spoilt for choice and there’s no guarantee of success for new entrants in that market, as Mercedes Benz have confirmed by killing its X-Class after just two years.

However, GM’s decision to axe the Holden brand means the donor vehicle for the SportsCat will no longer be available. Shame as it is a good product; worth hunting down a run-out bargain, perhaps.

The Series 1 SportsCat was based on the Colorado Z71 and while it received good reviews at its 2018 launch – HSV given credit for reengineering from the ground up rather than just slapping on some stickers – it was unknown territory for the niche developer of V8 performance cars.

The 1400 units all sold though and after collating customer feedback HSV made a few tweaks to the Series 2 SportsCat.

The most obvious changes are visual, with new alloy wheels and a revised graphics pack. The SportsCat is far more than a cosmetic exercise, but it is one area HSV nailed from day one – it looks tough and purposeful.

One small change in the cabin makes a big difference to how the truck feels; the steering wheel is now much thicker. Doesn’t sound like a big deal, but the wheel is the bit you touch most when you’re driving, if you’re doing it right. Combined with the positive steering feel (for a ute) and quick turn in (for a ute), the new tiller really adds to the sporting feel.

The enhanced handling is real. HSV spent years making cars go around corners quickly, after all. The front spring rates are stiffened to 110Nm/mm, with MTV dampers tuned to the spring rate, and front strut braces keep the front-end rigid.

The rear end still has leaf springs – thus retaining the 3500kg towing capacity of the donor vehicle – but is held tight by a 22mm diameter rear sway bar. This helps keep the SportsCat flatter through the corners. Select low range and the sway bar decouples, allowing the axle articulation needed off road.

The result of the reengineering is a distinct improvement on the already competent Colorado. The ride is firm, sure, but not uncomfortable and the enhanced body control with level cornering attitude is welcome when you’re hustling along. The new Cooper Zeon LTZ tyres complete the picture by delivering surprising grip on all surfaces without a huge increase in road noise.

HSV has also re-tuned the stability and traction control systems for less aggressive intervention so the driver can get the tail out a bit before the electronics rein things in.

The interior gets new front seats, covered in the same mix of suede and leather used throughout the cabin. Hard plastics haven’t been completely banished, but there are fewer of them and the cabin ambience is a step up from the Z71. Equipment levels are the same as the Z71, which is to say, they are good.

SportsCat Series 2 is evolution rather than reinvention. It is a cohesive product, not just a sticker and mag-wheel job.