Keep it low or keep it slow, advises insurer 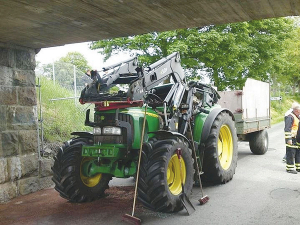 On average 15 tractors a week are damaged in accidents, says FMG.

The company says that on average 15 tractors a week are damaged in accidents, with rollovers a standout cause of serious damage.

Hence its new media message advising tractor drivers to ‘Keep it low or keep it slow’, because many insurance claims arise from the use of frontloaders during harvest and feed-out times.

FMG’s data shows that one in five claims results from objects falling from a frontloader, damaging bonnets, windscreens and cab structures. Typically, these objects include tree branches, bales and attachments such as buckets, forks and grabs improperly attached.

And one in ten claims arises from tractors rolling or sliding into drains or gullies and causing serious damage.

Again, says FMG, many of these claims arise when a loader has altered a tractor’s centre of gravity, increasing the risk of it rolling especially when it’s going too fast, turning too tightly or is on difficult terrain.

FMG is offering several tips to help prevent these types of accidents and rollovers. Chiefly, it says, travelling with the frontloaders as close to the ground as possible to help keep a low centre of gravity especially when loaded. Other tips include avoid carrying a raised load around corners and keep speed low when manoeuvring.

The company also says operators should be mindful of changes in the centre of gravity of tractors towing, say, trailers, wagons or fertiliser spreaders, particularly on slopes, sidling land or hill country. Such set-ups might result in a tractor ‘feeling’ stable, but an unstable trailer or negative drawbar weight transfer might cause a tractor’s rear wheels to lose grip and crash.

Rural News observes that the arrival of high output balers and baler/wrapper combinations in recent years has seen a marked increase in average bale weights: many early season silage bales now hit the one tonne mark.

It might be worth considering the use of a rear linkage-mounted counter-weight when handling these packages, to create a more stable load. And it may be time to move from the conventional drawbar/pin set-up to the European-style pick-up hook that moves the loading much closer to a tractor’s rear axle.