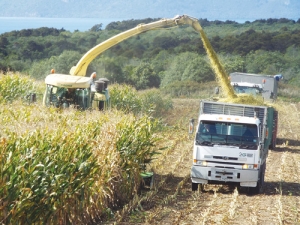 They say that X is an unknown quantity, but not so when you look at the Krone Big X range of forage harvesters.

The harvesters are gaining in popularity amongst agricultural contractors in New Zealand.

One such operator is Phillip Parry Contractors, of Mangakino, South Waikato, which recently changed a Big X 850 for a new Big X 1100, in time for the 2016 maize harvest.

Big X is certainly the right moniker for this machine: the stats make the eyes glaze and the jaw drop.

A Man V12 engine of 24L pumps out a constant 1078hp when working in applications such as maize, but it can be dialled back to a meagre 636hp for grass.

The machine tips the scales at 14.8 tonnes; add a maize header of at least 4t and 1000L of fuel and quite quickly 20t is seen and gone.

Partnered with a 7.5m Krone Easy Collect header swallowing 10 rows of maize, progress was effortless: the operator told us a 20 tonne was crop coming in at 39.5% DM, being chopped down to around 14mm with the engine holding steady at 1900rpm. Forward speed was around 6.5km/h in steep undulating terrain, but increased to 10km/h in some flatter areas.

Lamont said the machine "never wanted for power" -- a key consideration in the owner's purchasing decision.

In Parry Contracting's region a flat field is a rarity, so trucks are often challenged in their ability to hold constant speeds with the harvester. Constant truck speed averts the need for sudden downshifts which may lead to loss of traction and a risk of getting bogged down.

A closer look at the machine revealed it is designed to shift crop quickly. It has an industry leading feed roller width of 820mm, taking crop over six hydraulically driven compression rollers to the ledger bar, before it goes to a 20 blade, 660mm diameter chopper drum with knives in a chevron pattern presenting at 11 degrees for smooth slicing and maximum output.

Chop length can be adjusted by the driver in the cab, or the Autoscan system can be used to automatically adjust chop length dependent on dry matter readings, with a decrease in length as DM increases, so ensuring good consolidation at the clamp.

In a machine of this size a smooth crop flow is vital so Krone equips the Big X with a hydraulic concave around the chopping cylinder which can move to allow any large lumps to pass, maintaining maximum output.

From the chopping cylinder crop passes through the crop processor with 144 triangular profile teeth on 250mm diameter rollers that crack the kernels and release maximum feed value. From here the crop passes through the accelerator in a constant stream to the trucks and trailers. Easy adjustment of a flap in this area serves to increase or decrease the crop speed, depending on whether filling is to the side or rear, and allowing operators to save power in the event of side fill.

This machine's capacity has killed off the traditional family farm's cutting of silage using a small trailed unit, and the arrival, 30 years ago, and evolution of self-propelled harvesters makes it unlikely those small machines will ever return.

Cobra puts the bite on SP’s

Over the last two decades, the once familiar trailed forage harvester has become a rare sight in the paddock — is that all about to change?

New harvesters at the cutting edge