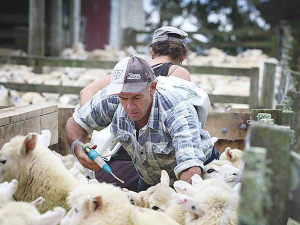 About 30% of the pastures in New Zealand will not provide an adequate selenium intake for grazing livestock.

There are four important trace elements to consider in New Zealand sheep flocks. These are selenium (Se), copper (Cu), iodine (I), and cobalt (Co).

A trace element deficiency will impact on ewe (and ram) fertility, as well as the health and growth of lambs.

In some situations, a trace element deficiency may be subclinical or marginal and, therefore, can only be detected by collecting the appropriate blood and liver samples for trace element and/or enzyme determinations.

As most trace element deficiencies occur in lambs, prevention is the best approach. To prevent white muscle disease (Se), swayback (Cu) and goitre (I), treat the ewe in early gestation with Se, Cu and I. Preventing Co deficiency is the exception – lambs are best treated with vitamin B12 at docking.

In this article we will look at Selenium – Se.

• Infertility in ewes as a result of embryonic mortality, which occurs three to four weeks after conception. This results in a higher percent of barren ewes and a low lambing percentage.

• White muscle disease in lambs, characterised by a non-inflammatory degeneration or necrosis of the skeletal and cardiac muscles. Lambs are born dead or die suddenly within few days of birth.

[Warning: Use only one of the following approaches to prevent selenium deficiency, otherwise selenium toxicity could become a serious problem.]

Inject ewes and rams subcutaneously in the neck region with a long-acting product containing barium selenate four weeks before mating.

Lambs do not have to be supplemented with selenium, since treating the ewe protects the lamb from white muscle disease and ensures good growth rates until at least weaning.

If ewes have not been treated and their lambs are selenium deficient, then they can be treated at three to four weeks of age at docking time. The dose is 12mg Se (1mg Se/kg LW) and its efficacy is for at least 10 months.

Oral dosing of 5mg of selenium (0.1mg Se/ kg LW) as sodium selenate to ewes and rams at four weeks before mating. The ewes again at four weeks before lambing, and a further 2mg Se to their lambs at docking. Lambs will require further drenching at 6-8-week intervals to maintain selenium status.

Top-dress in the autumn with 0.5 or 1kg of selenium prills to provide 10g Se/ha annually.

The ewes (and rams) must graze a selenium-treated pasture for a minimum of eight weeks; namely four weeks pre-mating and the following four weeks during mating.

Their lambs are likely to need a further 2mg selenium at docking. Preferably, ewes should be grazed on selenium-treated pasture for at least 16 weeks.

From a management point of view, after applying the selenium-amended fertiliser, the pastures must not grazed for at least four weeks, to allow the Se to be ‘washed’ into the soil and taken up by the pasture.