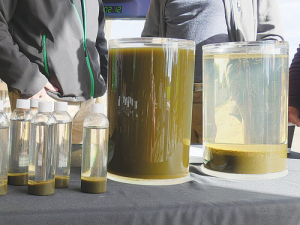 Samples of dairy effluent on show at the launch of the ClearTech system show how suspended solids precipitate out under the influence of a special coagulant.

If every farm in New Zealand used the new ClearTech system for harvesting clean water from dairy effluent, NZ would save 42 billion litres of freshwater each year.

That’s according to Ravensdown, which recently unveiled the system with its Lincoln University partners in the project.

ClearTech results from research by soil science professors Keith Cameron and Hong Di, who have identified a coagulant which, when mixed with dairy effluent, causes the solids to precipitate out and leave most of the water clear. The computer-controlled process also kills most bacteria.

Installed between a farm’s dairy shed and effluent pond, it produces water claimed to be of swimmable quality for recycling for yard washing.

A pilot system was recently shown running at the Lincoln University Dairy Farm. Ravensdown expects to be marketing commercial systems late this year.

Once the solids have precipitated out and the clear water is taken off the top, the concentrated remainder in the effluent pond is good for spraying on pasture.

“Irrigation equipment can pump it easily. In technical terms it might be called a slurry but it’s nowhere near a slurry, it’s still very liquid.”

They expected no ill-effects from the extra iron and sulphur ending up on the pasture.

“That’s minor: environmental scientists have looked at it and it’s minimal. In fact a lot of the iron and sulphur break down while it’s still in the effluent pond,” said Thompson.

Ravensdown chief executive Greg Campbell told attendees at the ClearTech launch that the co-operative’s catchcry is ‘Smarter farming for a better New Zealand’.

That requires innovation such as ClearTech, and working... to find new ways to reduce environmental impacts while enabling farmers to create quality food for more people and animals -- using less land.

“From our perspective, if that means selling less fertiliser... so be it.”

Ravensdown chairman John Henderson said the co-op is not just a fertiliser company; its environmental consultancy arm is now the largest in NZ.

“We are devoting a lot of our energy to helping our shareholders and farmers in NZ to farm more smartly for the benefit of NZ as a whole.”

The company says it spends at least $2 million a year on ClearTech and similar projects.