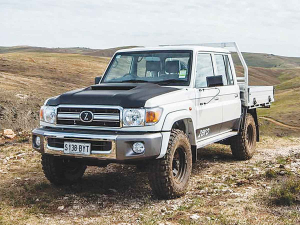 The ZED 70 is based on the rugged Toyota Landcruiser 70.

While hybrid and electric vehicles are in the news every week, particularly in the saloon and SUV sectors, alternative propulsion choices seem to have bypassed the massive ute sector.

That looks like it’s about to change with recent announcements from leading vehicle manufacturers. However, one Australian-built unit is ready to hit the streets or tracks now.

The ZED 70, built in Adelaide by Zero Automotives, is based on the rugged Toyota Landcruiser 70. It’s said to be engineered to face the harsh climates of the ‘dry country’ – particularly in the mining and agri-business sectors.

Although the company has no plans to mass produce the vehicle, it can supply units that are customised to meet industry-specific needs, producing design-compliant and road legal utes for under AU$200,000.

Said to offer an effective range of up to 350km, the ZED 70 features a 700Nm electric motor, partnered with a 20 to 120kW/hour battery pack. This combines to deliver more torque than the original, factory fitted V8 engine.

The company suggests the vehicle is particularly suited to confined environments where diesel particulates can have a detrimental effect on people working nearby. Using current and emerging technologies – such as geo-fencing, telematics and semi-autonomous operation – the ZED 70 can also be fitted with automated speed limiters for individual sites.