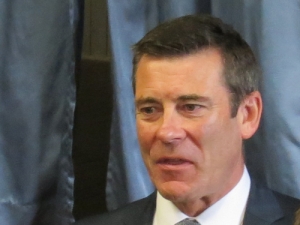 It seems the proposed new legislation isn’t much better, given that it’s been sent back to the transport and industrial relations select committee for “further consideration” – code for “it’s still a bugger’s muddle”.

Everywhere farmers are revolting at the prospect of some of the items in the proposed legislation – especially the ‘threat’ to ban passengers from quads and the prospect of farmers being overwhelmed by paperwork in having to conform to so-called safety plans. At the best of times bureaucrats are tolerated but seldom loved by farmers or even politicians, who see them as a hindrance rather than a help.

In this particular case, WorkSafe NZ has got itself off-side with many in the farming community – including some of its highly respected leaders. Even Woodhouse conceded to Rural News recently that WorkSafe has a “perception problem” with farmers.

Farmers are not against the intent of the legislation and they want to reduce accidents on farms, but they feel that the bureaucrats are not listening to them but are instead proposing impractical solutions, and that are driven by ‘process’, rather than outcomes. Farmers also see WorkSafe as being out there to get them and prosecute them for what they (farmers) see as minor infringements.

Farmers’ vocal opposition has not unnaturally been directed at local MP’s, mostly National Party ones, many of whom are themselves farmers, therefore openly sympathetic and very sensitive to the rural revolt.

To support the new legislation, as it stands, would be ‘courageous’ on the politicians’ part but it’s well-known that ‘courageous decisions’ can be politically suicidal and career ending. (A bit like Andrew Little’s idea of means-testing workers over 65). So faced with a rural revolt the Government has sent the bill back to the same select committee that produced the outcome that is still deemed politically unacceptable.

Will they do better this time as they mull over the legislation, fortified by a cup of tea – or something stronger? Will WorkSafe NZ back down and modify some of the more contentious proposals?

Or will some sort of deal be done by WorkSafe NZ and farmers to sort this out quietly behind closed doors and present a solution to the committee that lets the politicians off the hook?

The rural jury is out.

WorkSafe is reminding people that if a vehicle’s safety features are compromised, no one should drive it.