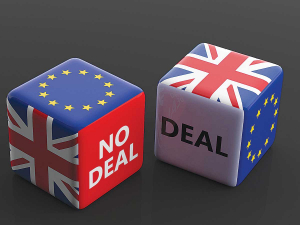 Britain and the EU will try and hammer out a deal before the end of the year - where a no deal is more than possible.

John Bruton, who is now the EU’s Ambassador to the USA, says under a deal or no deal, the extra time it will take for goods to clear customs between the UK and EU will lead to long lines of trucks queuing up at customs posts. He reckons the British people will quickly face major disruptions, higher prices for goods and an increase in the bureaucracy – all of which will annoy them.

Looking back on Britain’s involvement in the European Union, Bruton says the country saw itself as psychologically as being outside looking in, rather than actually being fully inside the union.

He believes this view was, to a degree, promoted by some sections of the British media and it was this scepticism of Europe that eventually led to the Brexit referendum and subsequently why the country decided to leave the EU.

“The basis of the argument for Britain leaving EU was that it would restore their sovereignty and they would become free again. But they never worked out in any great detail what they would do with their freedom and, to some extent, that is why they are now having difficulty negotiating the Brexit deal,” Bruton claims.

“They never worked out…the sort of relationship they would like to have with the European Union and that is the problem they still have today.”

Bruton says when the result of the Brexit referendum was known, no British politician wanted to appear in any way pro-European – they wanted a clean break.

He says the result is the fairly remote sort of trade agreement that is still being negotiated.

“They even talked about an Australian-type agreement, but without realising that Australia didn’t have an agreement with the EU, which could be code for no deal,” he says.

In the next days and weeks ahead, Britain and the EU will try and hammer out a deal before the end of the year – where a no deal is more than possible.

Bruton believes that secretly Boris Johnson may in fact want this. He says if there is a deal and it requires the support of the government, that could be a problem for Johnson to get everyone to agree.