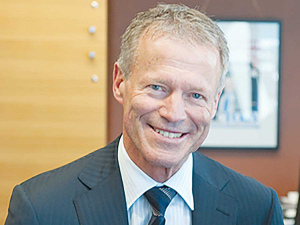 Lockwood Smith believes the UK has an opportunity to pursue a smart global trade strategy.

Whatever its strengths or weaknesses, the UK has heft. A member of the G7, G20 and hosting COP26 this year, it is a major player. The UK's trade strategy matters.

But while the UK's political leadership wants that smart global trade strategy implemented, charting the way forward has its challenges. Some of the most difficult of these lie in agriculture and the agri-foods sector.

There is a UK public fear that liberalising trade in agriculture may put at risk their high standards in food safety, animal welfare, the environment, and human rights, not to mention undermining the UK's work on climate change. Political leaders have given a commitment that the trade strategy will not undermine these deeply held priorities.

Making the problem even more complex is the fact that UK agriculture is just emerging from 40 years under the EU's Common Agricultural Policy. Its inherently protectionist nature was hardly the best preparation for an industry about to wade into the competitive international marketplace.

The TAC report to the UK's Trade Secretary contains an interesting innovation. The proposal has the potential to take global trade forward and avoid trade stifling ideas such as carbon border taxes, or dual exante tariff rates to address differing standards of production.

In essence, the proposal would see food safety, plant and animal health and biosecurity issues determined as at present under the SPS agreement of the WTO.

Allaying any UK consumer concerns on these issues shouldn't be difficult as the SPS agreement has proven efficacy.

More difficult are the issues relating to methods of production, such as animal welfare, the environment, labour and human rights, and now climate concerns. The TAC proposal would see the UK, in negotiating free trade agreements in the future, providing open access over time to the UK market where trading partners agreed to meet internationally recognised standards in these areas so important UK consumers.

Where, in a free trade agreement, a trading partner has agreed to certain animal welfare, environmental, human rights and ethical trade standards, yet fails to enforce those standards, thereby cheapening costs of production and creating a market distortion, the UK would be empowered to impose a remedial tariff on that product.

The size of the remedial tariff would be proportionate to the damage inflicted on local producers by the market distortion created by the trading partner. It would apply only to the product in question, and because it formed part of an FTA, could be applied quickly on clear evidence and removed when the problem, or market distorition, had been rectified.

Should the UK adopt this proposal, it would show the world that it was walking the talk on its Global Britain aspiration. It would show the world that it is prepared to liberalise key markets, even agriculture, but in a way that provides its own producers with the confidence that they would not be competing with products produced to lower standards than those agreed in trade agreements.

With climate change still a major matter on the world's mind, this mechanism may offer a way of dealing with countries that fail to meet their Paris Accord commitments, possibly gaining competitive advantage as a result.

It would provide an incentive to ensure trading partners do meet their climate change commitments, and, by avoiding the border carbon taxes, facilitate production continuing in countries where their comparative advantage may be more carbon efficient systems.

Fundamental to the policy, is the two-pronged approach - which the UK will open its market to trading partners must agree to implement internationally recognised standards, or the equivalent of them, as required in the UK.

Applied wisely, the proposal has merit; the UK is now in a position to take it to the world.

NZ/UK FTA there for the taking

New Zealand's former Trade Minister and High Commissioner to London, Sir Lockwood Smith, says a free trade agreement (FTA) with the UK is there for the taking.