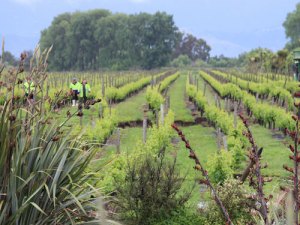 The power of the quake is obvious in these once perfectly aligned rows.

Unless you were in an area where you felt the full force of the November 14 Kaikoura earthquake, it is hard to comprehend the intensity of it.

To put it in perspective, the energy expended in those 2 minutes and 20 seconds of the earth moving, equated to eight million tonne of TNT exploding, or 40 atomic bombs.

So not surprising that Marlborough’s wine industry was affected. Even though the quake was centred towards the southern end of the region, the impact of that energy force exploding was serious, although it could have been a lot worse.

A survey undertaken by NZWinegrowers shortly after showed that just over five million litres of wine was lost. While that sounds like an awful lot, it is really just two percent of Marlborough’s total production.

What has been more concerning, is the damage to tanks within the region. The survey estimated that over 60 million litres of tank capacity was damaged, 20 percent of the region’s total capacity.

That is a lot of repairs and/or replacement required for the upcoming 2017 vintage.

Stainless steel manufacturers, while their books were already quite full, have been working overtime in an effort to help fill that gap in time for the fruit to start coming in.

If there is one saving grace coming into vintage 17, it is that yields look to be lower than initially predicted.

Inflorescence figures prior to December showed another large crop was on the cards this year. However variable weather conditions during flowering have meant yield predictions have dropped. Now growers and wineries alike are expecting a yield that will be slightly below average, to average. Nothing like the near record breaking yield of 2016.

Pernod Ricard’s Chief Winemaker, Patrick Materman says most importantly, thanks to the 12.02am timing, nobody at the winery was injured in the earthquake.

However the winery itself suffered a reasonable amount of damage, and while there was some wine loss, it has not impacted on the company’s ability to supply their markets.

“There has certainly been some impact, but this was largely in parts of the winery with older tank designs,” Materman says. “Tanks we had repaired after the last earthquake (August 2013) came through this one very well.”

The larger tanks, holding 280,000 litres, had been reinforced following 2013 and he says they will be able to provide plenty of capacity heading into vintage.

“But what we have lost is some of the range of sizes of tanks. Some of the older ones were a bit smaller, so they will take us a bit of time to replace or repair.”

A substantial amount of juice was moved out of Marlborough in the days after November 14, and Materman says that was one of the biggest hurdles for the company.

“It had been a logistical exercise emptying the winery for risk mitigation; moving wine away from  the risk of aftershocks, as well as sorting out the winery so we have the capacity to take in the 2017 vintage. It has been a challenge, but a great example of teamwork.”

Having wineries in Hawke’s Bay and Auckland helped alleviate the issue, with the latter winery now full of Marlborough wine. Pernod Ricard has also rented space at other winemaking facilities to ensure the upcoming vintage is not compromised.

“We have also done a lot of bottling ahead of time and managed to push wine out to overseas markets a bit ahead of when we usually do.”

The other issue for companies such as Pernod Ricard, is getting fruit to the Marlborough winery, from further south. With SH1 out of action south of Clarence, Waipara and Central Otago fruit will now have a long drive to get to Marlborough. Instead of it being three hours on the road, it will now take at least seven to get from Waipara.

Jack Glover, General Manager Accolade NZ, says they are in a similar situation, having vineyards in Waipara with processing facilities in Marlborough. Although the Accolade wines from Waipara are made at the Waipara Hills winery.

“In terms of Mud House fruit out of Waipara, the Pinot Noir, Riesling and premium Pinot Gris, we would process down there,” Glover says. “But the others we would have brought to Marlborough. (With SH1 out of action) we may look differently about whether we bring the fruit up, or if we bring it up as juice. We still have to make a decision on that.”

Mud House wines are made through New Zealand Wineries, based at Riverlands. Glover says there was damage to a number of tanks within the winery, and as was the case at Pernod Ricard, it was the smaller format tanks most affected.

“That could potentially make a difference to how we look to utilise tank space available this vintage. If there are fewer smaller tanks available, we may be forced to move away from smaller lots off different blocks.”

Some of the more premium blends have been affected, which he describes as a “great shame”.

“At the time of the earthquake, some of our premium product was in the compromised tanks and that will have an impact. While the literage won’t be high, the commercial value is higher.”

A large amount of Mud House and Accolade products are moved off shore for bottling in Accolade Park in Bristol, and that has freed up tanks for the forthcoming vintage.

To help make up for shortfall, he says ISO containers have been brought in and there will be discussions about moving wine out as soon as possible to be bottled.

Giesen Wine’s Marlborough GM, Rhyan Wardman says the company came through the November quake better than it did in 2013.

“In 2013 Giesens was affected, it was one of the few that were. We were fortunate that we could move wine out and other wine companies generously helped in storing it. That freed up space to build new tank farms. All those new tank farms have come through fine.”

Wardman who is also the Chair of the Wine Marlborough Board, says quick action taken by the industry straight after the earthquake is a credit to all.

“We came together quite quickly after the event. NZW were very good at forming the earthquake recovery steering committee and most importantly getting the survey out to try and understand what we were facing. We were able to take those survey results and have a meaningful discussion around them. We talked about that information and we made it transparent, not only for our members but also our markets.”

He said while there has obviously been damage, it has to be remembered the region was struck by an extremely powerful earthquake.

“We have to remind ourselves that it was a 7.8 – that is a significant event and we have come through it. There are some learnings that will come out of this event. We are getting better and better in terms of our processing space, our tank manufacturing, our catwalks. I imagine that we will come out of this fairly robust.”

In terms of moving forward, Wardman says there are two aspects to be considered. The remedial action being taken now and the long term security of the industry.

“There are various levers being pulled now, like ISO storage, advanced bottling, storage in other centres. All these are being done pre vintage to allow us to get through vintage 17.

“The second part of the discussion will be how do we affect long term security of our wine processing and continuity of supply to all our markets. Mitigating risk along our entire supply chain will be a focus for us all in the years to come.”

He also says that given how much wine was in tanks when the quake hit, the 2 percent loss implies that many of the tanks did what they were supposed to.

“Some performed better, some not so much. But that has to do with either the location, the age of those tanks and the various systems around it. We also have to remember, that whilst our industry is young, it does span 30 – 40 years.

The 7.8 earthquake expelled the equivalent energy of 8 million tonnes of TNT exploding or 40 atomic bombs

It is estimated that just over 5 million litres of wine was lost in Marlborough, although this is just 2% of Marlborough’s total production

60 million litres of tank capacity was damaged or destroyed

Close to 1000 tanks were damaged to some extent

Three were between 5 and 6