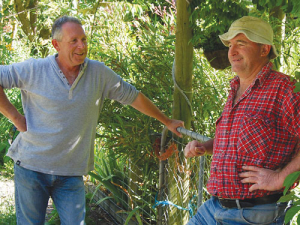 The quake has brought huge changes for Collins and his neighbour Grant Wareham, who sold his dairy block to Collins rather than wait for his wrecked rotary shed to be replaced.  For Collins that meant doubling his herd at a time when he was still milking in an old condemned shed while its replacement was being built.

Collins’ new shed is now into its second season, but repairs to the farm’s drainage, irrigation and accommodation have barely begun.

Collins farms on the low-lying flats close to the town of Kaikoura – at the lower, more swampy end of the small plain that slopes up towards the mountains to the west.

When the quake struck, it left Collins’ 45-year-old herringbone shed with shattered foundations but still usable.

The shed had been built by his father about 1971, on a site right beside a creek where a milking shed had stood for well over a century. In those days, wash-down water was bucketed in and drained straight back to the creek.

Collins said he wanted to rebuild on the same site because it was close to other amenities such as his calf shed, but he found that under MPI rules he couldn’t do a major rebuild within 40m of the creek.

“We’ve always been looked at quite sternly by ECan and MPI when they come to do an annual inspection because we are close to a waterway. We’d upgraded over the years so there was no effluent going in there but I suppose that was just one of the rules on their books.”

Meanwhile, the deal to buy out Wareham’s dairy block meant Collins’ cow numbers doubled from 350 to 700. To accommodate them the new shed is a 47-a-side herringbone compared with the old 35-a-side. However, delays meant it wasn’t ready until the end of November last year so the larger herd started the season being milked through the old damaged shed.

“So we doubled our problems by upsizing at that time,” admits Collins. “This time last year things were quite stressful, on cows and people.

“There’s benefits in the new shed but there’s disadvantages as well. We’re getting to used to it. As I say, it’s the new normal now.”

Collins adds that insurance battles with his Farmers Mutual insurer added to the stress. “We eventually got them up over a third in dollars. We got nothing we weren’t owed and to my mind they got away with some things they should have paid for but didn’t,” he says.

Collins says there are still ongoing issues with the farm. Drainage is the biggest issue yet to be tackled properly.

“That’s a problem because our farm is quite heavy, and wet areas have sprung up where they weren’t before. And there are paddocks that were drained and the drains have broken up and they’re back to swamp. That’s quite an issue for us.”

Replacement of the drains would have to happen at some stage but was not covered by insurance.

The open ditches which the drains feed into had also silted up. Collins said they were still being dug out during the week which marked the quake’s second anniversary.

“There’s been more important things to get up and running.”

Collins has repaired the breaks in one of two irrigation systems but the second, larger one still hasn’t been turned on to see what breaks it may have.