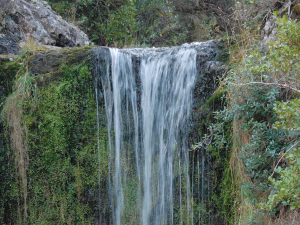 Farmers claim the country above a 30m waterfall has been caught up in a mātaitai reserve, although records show the area was never a traditional fishing or food gathering area.

They believe this will impact on their ability to use the waterways on their properties.

Mātaitai reserves allow for customary fishing areas to be protected and are imposed by the Minister of Fisheries.

The farmers, based in the northern part of the South Island, claim the three mātaitai covering the Kaikoura and Inland Road area take in every inland waterway and ephemeral stream. The affected landowners say the vast majority of these waterways do not hold harvestable fish species and were never customarily fished.

The group of affected landowners – the Mātaitai Landowners Group (MLG) – are also “deeply concerned” about the lack of consultation over the placing of the mātaitai reserves and the restrictions these will place on the use of the waterways on their land and potentially the land surrounding them.

Bryden Black, spokesperson for MLG, says the group welcomes the placement of mātaitai over traditional fishing and food gathering areas.  However, he claims these are typically coastal and estuarine sites, with evidence from NIWA and Ngai Tahu showing that the mātaitai established in the region include a number of inland waterways that were never fished or used for gathering food.

His group is perturbed about the poor consultation process carried out by the Ministry for Primary Industries (MPI) before the imposition of the mātaitai.

“We only found out by chance that the former Minister of Fisheries, Stuart Nash, had gazetted the three mātaitai in September 2018 and by that stage it had become a fait accompli,” Black says.

“While MPI agreed to meet with us in August to discuss our concerns, their official response in September was that they saw no reason to revisit any of their decisions,” Black says.

He believes the mātaitai can place restrictions on the use of the waterways and adjoining land, which would not only limit the landowners’ enjoyment of their waterways.

“It could also prevent farmers’ the ability to diversify their businesses to include accommodation for fishers and guided fishing.”

Black says MLG is now seeking a judicial review of the three mātaitai and is asking for help with the cost of the process, which have been estimated to be between $60,000 and $80,000.

“The aim is not only to seek relief in terms of the extent of the mātaitai,” Black adds.

“We also want to seek judicial direction to the Government with regards to consultation processes with rural communities in the future, to ensure consultation is meaningful.”

Mātaitai reserves are developed and managed by tangata whenua.

These recognise and provide for:

More in this category: « Parker announces 19 waterways projects Covid to cast a shadow »
back to top