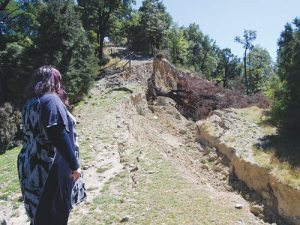 Kara Lynn at one of the smaller of the chasms which opened up on the property she farms with husband Steve Palmer, near the epicentre of the November 14 earthquake.

Kara Lynn and Steve Palmer are so pleased with the performance of their three-year-old “quake-proof” house they recently held an open day to show visitors around.

Their steep hill country farm, about 15km north of Waiau, provided some of the most iconic published images of the November quake.

A huge chasm, hundreds of metres long, about 30m wide and at least 50m deep, opened on one boundary, and a smaller horseshoe shaped one on the edge of the river terrace, swallowed some old cars Palmer was keeping for restoration. The cars are still there, lying at crazy angles amid the jumbled earth, while other quake repair priorities take precedence.

Lynn says the land is still moving in many places and she expects it to shift even more with winter rains. A vehicle track, which the couple need to get to a large paddock at the back of the farm, is right on the edge of the large canyon and is progressively falling in. Lynn says the only way to replace the track may be to cut a new one through a conservation reserve.

Another smaller chasm, only about 100m from their house, has cut away a stock track and the only way to repair that one will be to cut a corner off a section of native bush preserved under a QEII covenant.

She says the best thing they did when they built the house was to choose one designed to survive a 9.6-magnitude earthquake. That decision came from their experience of the 2010-2011 Christchurch quakes, which broke the back of their then concrete-slab foundation house at Amberley.

The farmhouse, a Fraemohs built of solid interlocking timber walls on deep timber piles, performed superbly in the November quake. While cupboards and shelves emptied across the floor, the structure itself was essentially undamaged, without even cracking to the floor tiles.

“We built this place for our kids because we knew there was going to be another quake at some point,” Lynn told Rural News. “But nobody predicted that, did they?”

The family has had the farm, in a bend of the Lottery River, since 2001. Initially commuting from their property at Amberley, they moved into a cottage on the farm about five years ago, then moved into their new house three years ago.

Lynn is active in TimeBank Hurunui, a scheme which allows people to share their skills with each other, trading in time credits rather than money. The recent open day was organised through the time bank and attracted about two dozen people in a 4WD convoy to see the worst of the land damage and marvel at the intact house.

Lynn, who has fine arts and accountancy degrees, also does home tutoring through the time bank.

She also helped local children deal with their quake trauma with two “art therapy” days, one at Culverden in December and one at Rotheram in January. A grant of $200 from the Rural Support Trust provided art materials for those events.

She says the time bank helped bring the community together.

Their property is off-grid, with 240V power supplied by photoelectric solar cells, a battery bank and inverters. Hot water is also solar, augmented by a woodstove with a wetback. They cook on the woodstove in winter and a gas hob in summer.

The only access is by a ford in the river, which means they can be cut off by poor weather for days at a time. Their 1000ha carries about 1800 Perendale sheep and 150 Hereford-Angus cattle.

Much of the damage to the farm has yet to be repaired. Lynn says none of the fences are yet properly stockproof. They do not have access to a large leasehold block where they usually winter their cattle. Sheep now on that block will need to be brought in by the end of March.